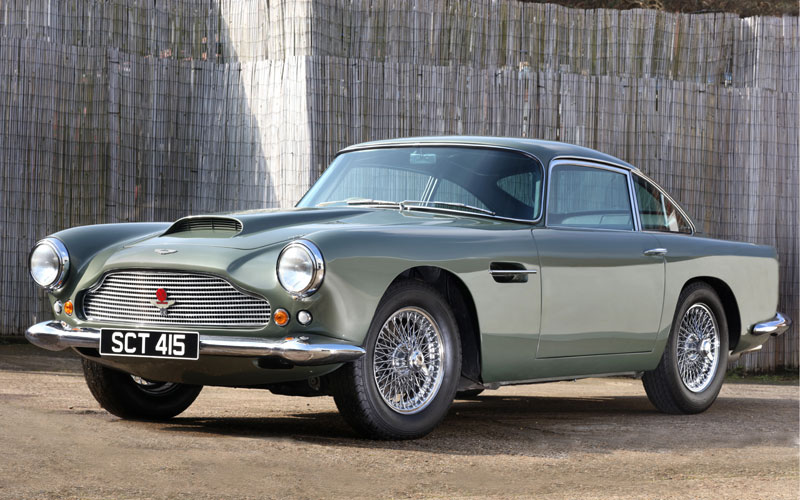 - Part of a European collection for over 20 years

Debuting at first the Paris and then London Motor Shows of 1958, the Aston Martin DB4 was a world class high-performance GT. Some four years in the making, its gestation was overseen by the marque's Technical Director John Wyer. Working alongside Carrozzeria Touring of Milan, Harold Beech developed a robust sheet-steel platform chassis which could accommodate the Italian coachbuilder's 'Superleggera' or 'Super Light' method of body construction (whereby hand beaten aluminium alloy panels are fitted over a cage-like structure of small-diameter support tubes). Equipped with independent coil and wishbone front suspension, a Watts linkage located 'live' rear axle and four-wheel disc bakes, the model was powered by a new all-alloy DOHC straight-six engine. Displacing 3670cc thanks to its 'square' bore and stroke dimensions (92mm x 92mm), the sophisticated powerplant was designed by Tadek Merak.

Interestingly, the Polish-born engineer is thought to have fought Wyer's wishes for a more competition friendly 3-litre unit and to have initially favoured cast-iron construction. With a quoted 240bhp and 240lbft of torque on tap, the two-door fixed-head also boasted a four-speed all-synchromesh manual gearbox as standard. Reputedly capable of 0-60mph in 8.5 seconds, 0-100mph in 21 seconds and 140mph, the DB4 won rave reviews from the likes of Autocar and Motor magazines. Despite a well stocked dashboard, finest Connolly hides and thick carpets, the refinement of early cars was compromised by wind roar at speed. Frames were quickly adopted for the side windows as a result and the 2+2 progressively refined through five series (a process that also saw it put on weight). Introduced in January 1960, the Series II variant was distinguished by its front-hinged bonnet, flat glass opening rear quarter lights, uprated front brake callipers and increased oil sump capacity. Of the 1,110 DB4s made, just 350 are thought to have been Series II cars (chassis DB4/251/L to DB4/600/R).

According to its accompanying copy Aston Martin Ltd (AML) Build Sheet and Service Records, this particular Series II example - chassis number DB4/415/R - was supplied new via Raymond Mays to Rowland Hunt Esq. of Aswardby Hall, Spilsby on November 11th 1960. Acquired by watchmaker Bentima Co Ltd of 168 Old St, EC1 the following April, a copy continuation logbook on file shows that ownership later transferred to James Mario Elliot of Carlisle Place, SW1, Brenda Diane Making, Anthony Elliott and C. Benge (interestingly, the latter three all quoted 28 Carlingford Road, Morden, Surrey as their address). The same document also reveals that the DB4 was upgraded with a later series powerplant during the 1960s (engine number 370/894 supplanting 370/487). Early DB4 engines were prone to failure hence the reason that Aston Martin added an oil cooler to its specification as the model evolved. Part of a private European collection from the late 1980s through till 2014 when it entered the current custodianship via the Landmark Car Co Ltd, chassis DB4/415/R has since been substantially improved.

Treated to a 'top-end' engine overhaul including replacement big valve cylinder head by Motronic Automotive Services of Iver at a cost of some £9,411.47, the four-seater was subsequently despatched to marque specialist Chicane Classics for over £30,000 worth of attention to its steering, brakes, front / rear suspension, exhaust and tyres etc. Cosmetically enhanced via a respray in California Sage Metallic, the Aston Martin started readily upon inspection and is understood to have covered some 500 post-fettling miles. Trimmed in Black leather as per its build specification and reunited with its original registration number 'SCT 415', this rare Aston Martin DB4 Series II is offered for sale with UK V5C Registration Document, copy build record, copy continuation logbook and numerous restoration bills / invoices.
Share: