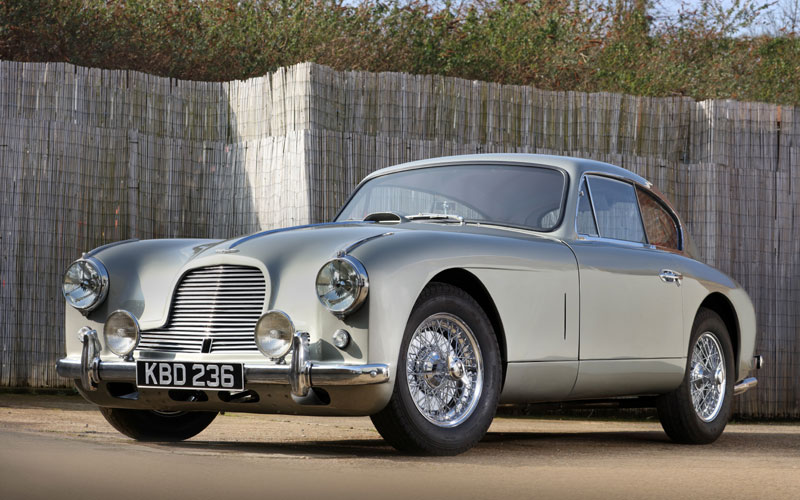 - Supplied new via Northampton Motor Services to Colonel Nigel Victor Stopford Sackville CBE of Drayton House, Lowick and retained by him until 1966 at circa 58,000 miles.

"The Aston Martin DB2/4 is a sports car with a very definite appeal. It has full saloon car comfort, coupled with performance and roadholding of a very high order" (Autocar Magazine)

Introduced at the October 1953 London Motor Show, the DB2/4 represented a new breed of longer-legged, more accommodating Aston Martin. Some seven inches longer and a little taller than its predecessor, the fitting of a smaller seventeen gallon fuel tank (still good for circa 300 miles) plus some minor platform changes liberated enough room for two small seats to be positioned above the back axle. Visually distinguished by a one-piece windscreen and rear hatchback, the new model boasted such niceties as a telescopic steering column and adjustable backrests. Panelled in lightweight aluminium over an advanced tubular frame chassis, its independent front suspension featured a sophisticated trailing link, coil-sprung set-up tempered by an anti-roll bar, while at the rear a Panhard rod assisted radius arms in keeping the coil-sprung beam axle firmly tied down. Initially powered by a 2580cc version of the famous Willie Watson / W.O. Bentley designed DOHC straight-six engine, the adoption of a larger 83mm bore size saw capacity rise to 2922cc in mid 1954. Thanks to its 'Vantage' state of tune, the 2.6 litre unit was credited with developing some 125bhp and 144lbft of torque - outputs sufficient for a quoted 111mph top speed. Overshadowed by its racing DB3 / DB3S siblings, the model still enjoyed a successful competition career winning the team prize on the 1955 Monte Carlo Rally (interestingly, the factory also fielded a pair of DB2/4s for the Mille Miglia). Of the 565 MKIs made, just 448 are thought to have been two-door saloons.

According to its accompanying copy Aston Martin Ltd (AML) Build Sheet and Service Records, this particular MKI 2.6 litre example - chassis number LML/656 - was supplied new via Northampton Motor Services to Colonel Nigel Victor Stopford Sackville CBE of Drayton Park. Specified with optional heavy duty shock absorbers and RJ needles, the 2+2-seater underwent further preparations for Continental Touring at the Feltham Works during June 1954. Pleasingly retaining its original Instruction Book which shows that new tyres were fitted in April 1958 (29,000 miles), September 1961 (45,000 miles) and June 1965 (58,000 miles), 'KBD 236' was still wearing the latter set of Pirelli Cinturatos when it entered the current ownership via our April 2011 Buxton auction. A Northants resident for almost all its life and dry stored for forty-two years (1969 - 2011), the Aston Martin still shows just two former keepers on its V5C Registration Document. Believed to have covered just 65,000 miles from new, the DB2/4 has not long emerged from an extensive, nigh on 'nut and bolt' restoration that saw it stripped to a bare chassis.

Having sought advice from the likes of Aston Services Dorset, Nicholas Mee, Four Ashes and Chicane Classics, the vendor had Ian Pitney and former Mulliner Park Ward panel beater Lance McCormack refurbish the chassis and bodywork. The factory-fitted engine was overhauled by Dave Swithen using parts sourced from Stamper Aston Martin of Cumbria (the same firm also supplying numerous components for other aspects of the project). Tarrozzeria carried out the repainting, while ex-Wood & Pickett craftsman Patrick Hanson re-trimmed the interior ('KBD 236' was originally finished in Moonbeam Grey with Red Connolly leather upholstery). Further benefiting from new wire wheels shod with Avon tyres, rejuvenated brightwork and a fresh wiring loom etc, the DB2/4 started readily upon inspection and boasts a current MOT certificate valid until 31st January 2017. Gaining as much pleasure from preserving Britain's motoring heritage as he does from driving it, the vendor is only offering this highly presentable, 'matching numbers' Aston Martin for sale to fund a series of other restoration projects.
Share this page: