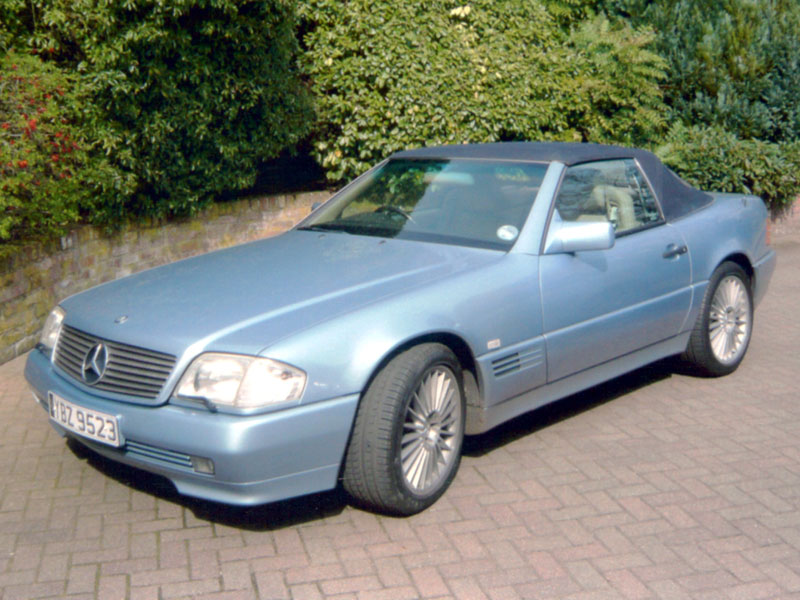 The landmark 300 of 1954 and the ensuing 190 comprised the first generation of Mercedes-Benz's iconic SL models. The second generation SL began with the 230 of 1963 and was distinguished by its lower waistline, big curved screens and a distinctive optional hardtop that earned the model its nickname of 'Pagoda top'. The larger, third generation car was launched in 1971, initially with just a 3.5-litre engine (350SL) mated to a four-speed automatic transmission. The car featured a two-door monocoque bodyshell with independent suspension all round - double wishbone and coil springs at the front and semi-trailing arms and coil springs at the rear. The power assisted steering was Daimler-Benz's own recirculating ball system. Braking was by discs - ventilated on the front. The range grew to two models when the 450SL derivative arrived the following year and to three when the 280SL appeared in mainland Europe in 1974. The latter became available in the UK during October 1980, but was replaced by the 300SL in 1985. The fourth generation (R129 Series) was launched at the Geneva Motor Show of 1989 and was based on a shortened version of the W124 floorpan. It was a beautifully-engineered car that bristled with technical refinement and innovative safety features. The specification included independent suspension all round (double wishbone at the front/contemporary five link system at the rear), adaptive damping, ventilated disc brakes with ABS, electronic stability control, a hidden roll-over bar that automatically extended when required, and front air bags. The specification was comprehensive and included electrically powered windows, mirrors, seats and convertible top.

The right-hand drive R129 Series 300SL being sold is a 1992 example with Metallic Blue coachwork and a Cream interior. The vendor has owned the car for the last three years and currently considers the engine and paintwork to be "excellent", the bodywork and four speed automatic transmission to be "very good" and the interior trim to be "good". 'YBZ 9523' comes complete with rear seats, hardtop, Clarion radio and six-stack CD changer with remote control, £1600 worth of AMG alloy wheels, a degree of service history covering the last 30,000-40,000 miles (the odometer currently registers 103,600) and an MOT valid into January 2013.
Share: