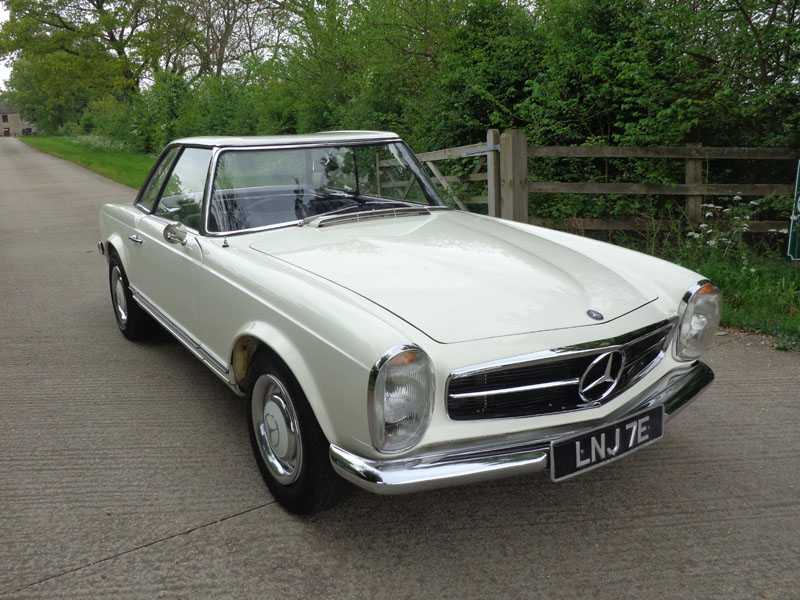 - 44,000 recorded miles and in its last family ownership for no less than 30 years

Faster than the preceding 230 SL yet more agile than its 280 SL successor, the 250 SL was officially introduced at the March 1967 Geneva Salon. It was powered by a new, seven bearing crankshaft, 2496cc SOHC straight-six engine developing 150bhp and 159 lb ft of torque - sufficient output to endow the Mercedes with a 0-60mph time of a whisker under 11 seconds and top speed just north of 120mph. Suspension was fully independent, braking was by power-assisted discs on all four corners, and steering by power-assisted recirculating ball. The model was in production for a mere 12 months, during which just 5,196 were sold worldwide, making it by far the rarest member of the W113 family.

The lovely righthand drive example now offered remained in its last family ownership for no less than 30 years, prior to which it appears to have had just four keepers. It was the subject of a £38,000 three stage restoration that extended from 1998 to 2007 and is believed to have spent a period off the road prior to that. Under the circumstances the low indicated mileage of 44,000 is very credible, though cannot be fully warranted. More recent expenditure includes: New trackrod ends, handbrake shoes and carpets (2011), New rear brake calipers, discs and pads (2015), Reconditioned steering box fitted and oil service carried out (2016), New hood and seat covers professionally installed, plus replacement spark plugs and air filter (2017).

'LNJ 7E' features nicely patinated White bodywork teamed with contrasting Black MB-Tex upholstery. The vendor currently regards the bodywork, paintwork, interior trim, engine and automatic transmission as all being in 'good' order, and is now offering this very attractive 'Pagoda' complete with hard top and brand new soft top, handbook, restoration and other invoices, and a selection of old MOTs plus one valid into October.

PLEASE NOTE: This lot now has an MOT into May 2018
Share: