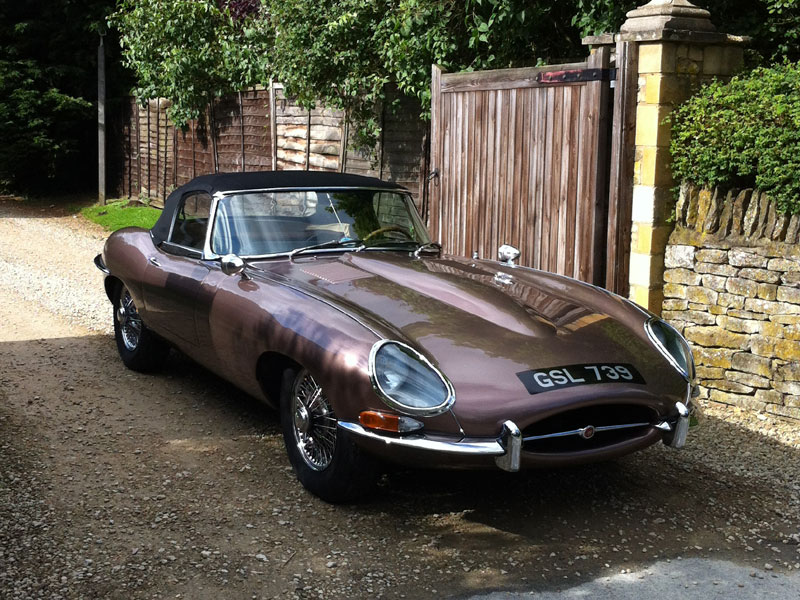 Famously launched at the 1961 Geneva Salon, the Jaguar E-Type created a furore. With its stunning looks, outrageous performance and low price tag, the newcomer left rivals reeling and customers clamouring. While, early competition success at the hands of Graham Hill and Roy Salvadori amongst others helped cement its reputation. Built as a monocoque with an engine cradling front sub-frame, the model's combination of all-round independent suspension (torsion-bar front / coil-sprung rear) rack and pinion steering and four-wheel disc brakes gave it excellent roadholding and handling capabilities. Fed by triple SU HD8 carburettors and topped with a 'straight port' DOHC cylinder head, its 3781cc straight-six engine was quoted as developing some 265bhp and 260lbft. Allied to a four-speed Moss gearbox, the free-revving unit reputedly enabled the E-type to sprint from 0-60mph in 6.9 seconds and onto 150mph.

Seemingly borrowed from a light aircraft, the wonderful turned aluminium centre console that adorned its dashboard was complemented by scalloped 'Dunlopillo' seats and a wood-rim steering wheel. Achingly beautiful yet viciously quick, the E-type remains for many the ultimate production Jaguar. While any roadster is desirable, the so-called 'flat floor' cars enjoy a particularly exalted status. Dating from early in the production cycle before Jaguar responded to popular demand and had footwell recesses pressed into the model's previously 'flat-floor' platform so that it could better accommodate tall drivers, they arguably represent the automotive icon in its purist form.

Finished in Salmon Metallic with Cream upholstery, this left-hand drive 'Flat Floor' Roadster was repatriated in June 1998, since when its bodywork, engine and running gear are understood to have benefited from restoration, for which there are apparently lots of receipts. The cooling system has been overhauled and the car fitted with a Kenlowe fan, while coil-over gas dampers have been installed all round. 'GSL 739' is MOT'd into July 2013.
Share: