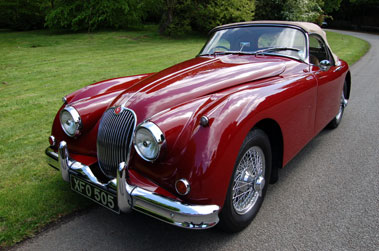 Last flowering of the separate chassis XK sportscar line, the XK150 was introduced in 1957. A more sophisticated and refined design than its forebears, the newcomer benefited from the adoption of four-wheel disc brakes and a more generously proportioned cabin. Available with a variety of 3.4 litre or 3.8 litre DOHC straight-six engines (in differing states of tune), potential customers could also choose between four-speed manual or three-speed automatic gearboxes. An effortless performer (contemporary road tests recorded top speeds of 130mph upwards) the XK150 did much to cement Jaguar's reputation as Britain's foremost sports car manufacturer. Although, the model could be ordered in standard trim, the majority of customers seem to have opted for the factory-fitted 'Special Equipment' (SE) pack which incorporated wire wheels, front spotlights, overdrive gearing, tuned B-type cylinder head and a twin exhaust system. Appearing in 1958, a year later than its Fixed Head Coupe and Drophead Coupe siblings, the Roadster was a strict two-seater. Decidedly more rakish looking thanks to a repositioned scuttle (moved four inches further back) and curved door tops, it nevertheless boasted a proper hood and wind-up windows. A comparative rarity, just 2,263 Roadsters are thought to have been made (compared to 2,682 Drophead Coupes and 4,450 Fixed Head Coupes) with the vast majority being sold overseas.

According to information kindly supplied by the XK Gazette, this particular example rolled off the Browns Lane assembly line in August 1958 (while other sources suggest that it was 1 of just 1,297 3.4 litre Roadsters made). An SE export model, chassis number `S831166DN' was repatriated from America during 1986. Shortly thereafter the Jaguar is said to have been "stripped down" and treated to "a very thorough restoration by its previous keeper" which took "many years to complete". Regrettably the bills associated with its refurbishment were put through the then owner's company and so are no longer available (though, we are told that "the results of the work speak for themselves"). As well as being converted from left- to right-hand drive, the Roadster was made easier and arguably more pleasurable to drive via the fitting of power assisted steering and a five-speed manual gearbox. Repainted red, retrimmed with tan leather upholstery and riding on chrome-plated wire wheels, the XK150 is described by the vendor as "a real eyeful"; while, he variously considers it to be in "very good" (paintwork, interior trim), "good" (electrical equipment, engine) or "excellent" (coachwork) condition. A striking looking yet subtly enhanced machine, this appealing Roadster is offered for sale with MOT certificate valid until December 2009 and historic class (free) road tax.
Share: