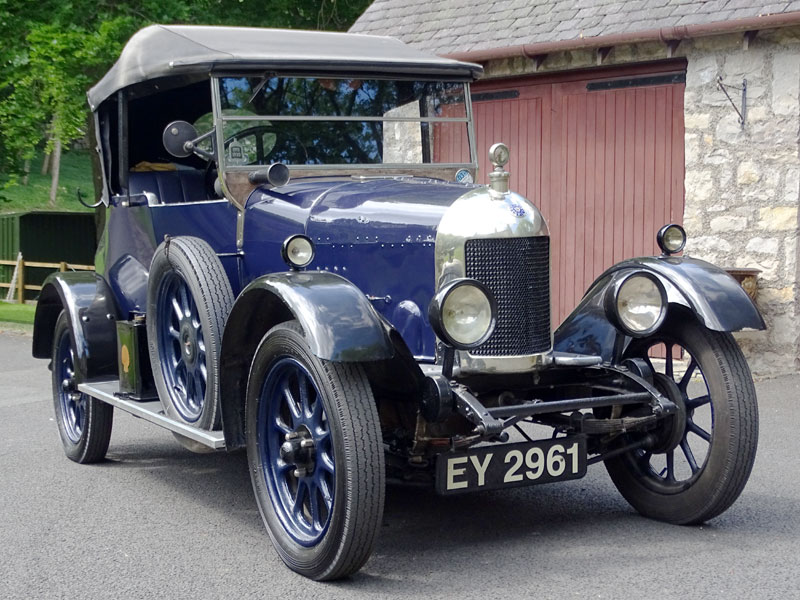 William Morris and Hans Landstad are said to have conceived the Cowley as a companion model to the Oxford whilst aboard the 'Mauretania' ocean liner in August 1914. Their transatlantic foray was to secure a supply of engines from Continental of Detroit at £18 each. After WW1, Morris had the Cowley's redoubtable four-cylinder sidevalve engine made by the French Hotchkiss Company's Coventry plant. According to a letter on file from the Registrar of The Bullnose Morris Club, Mrs Margaret Goding, this particular example was built on May 21st 1926. Known to the Club since 1978 when Gareth Morgan of Caernarfon brought its survival to their attention, the Morris remains registered in his name to this day. Accompanying invoices from The Cooke Group and others show that Mr Morgan spent a considerable time restoring the car. Indeed, it was not until September 1st 2001 that the DVLA re-registered the two-seater plus dickey for road use. Research done via the Anglesey County Record Office allowed him to reunite the Morris with its original 'EY 2961' number plate some five years later. Pleasingly retaining its factory-fitted engine (number 168519), the Cowley started readily upon inspection. Finished in Blue over Black with Blue upholstery and a Black hood, the Bullnose now presents as an older restoration. Nicely detailed, it sports a calormeter mascot, side-mounted spare wheel, klaxon horn, spare fuel can and four-wheel drum brakes. The Vintage Sports Car Club Eligibility Document which the Morris was issued with during April 2007 lists its engine crankcase, gearbox casing, back axle casing, front axle and chassis as all being original. The Bullnose Morris remains among Britain's favourite Vintage cars and looking over 'EY 2961' it is not hard to see why! Offered for sale with V5C Registration Document, correspondence dating back to 1979, numerous bills and assorted old MOTs / tax discs.
Share this page: