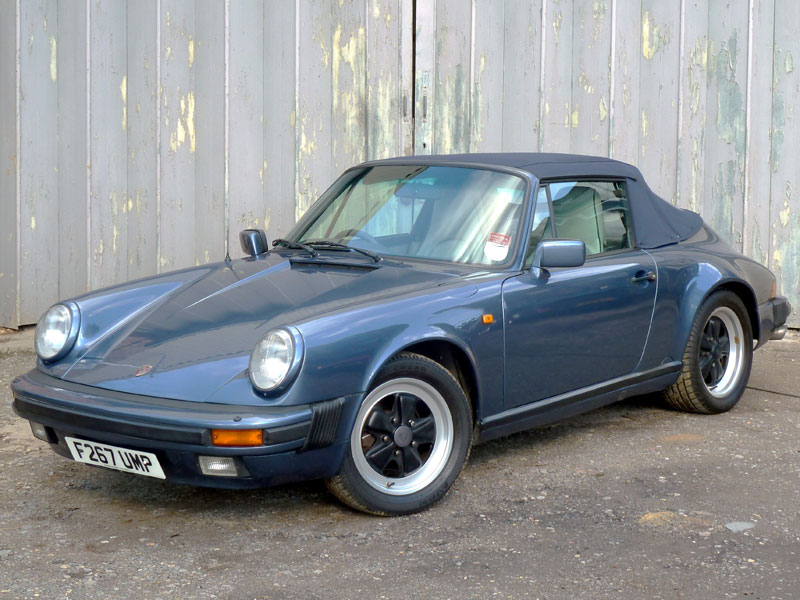 PLEASE NOTE: We apologise but this vehicle is Withdrawn from our 29th March 2017 auction.

After a lengthy gestation period, the now ubiquitous Porsche 911 entered production in 1964, and much evolved versions of it remain in production to this day, 52 years later. Initially powered by an air-cooled, 2-litre, flat-six engine, in common with all other aspects of the 911 the engines have undergone steady evolution ever since. The 911 Carrera 3.2 made its debut at the Frankfurt Motor Show of September 1983. Visually indebted to the outgoing 911 SC, the Carrera wore a revised front valance with auxiliary driving lamps and a subtle 'Carrera' script on its engine lid. The model's 3164cc flat-six engine was credited with developing some 231bhp and 209 lbft of torque and was allied to a five-speed transmission, making it reputedly capable of 0-60mph in 5.3 seconds and 153mph. Some 19,987 Cabriolet variants of the 3.2 Carrera were sold between 1984 and 1989.

This very late 1989 model was supplied new by renowned London Porsche dealer Charles Follett of St. John's Wood, and was first registered on April 4th 1989 with the desirable number plate of KMJ-1, a plate it appears to have worn for the first five years of its life. Presented with a handbook and its original service book, the comprehensive history of this Cabriolet details that it was maintained by London (NW2) Porsche specialist Pickup Motorsport between 2001 and 2012, with a print-off of the maintenance invoices from Pickup covering the period 2005 to 2012. These show that a new clutch was fitted in March 2011 and there is also an invoice on file for a new roof in May 2012.

Presented in a wonderful colour combination, this super looking 911 displays a total of 125,600 miles on it odometer and is described by the vendor as having very good bodywork, paintwork and interior trim.
Share: