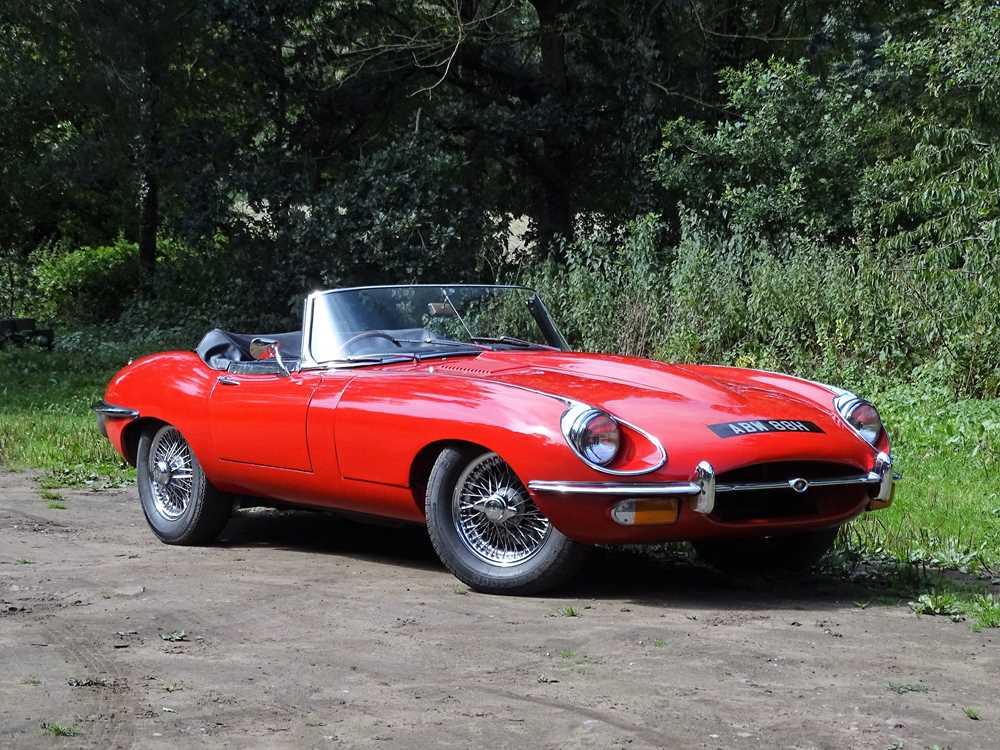 One of just 776 Series II Roadsters made to right-hand drive specification, chassis 1R1508 was first registered with the Nottingham number plate ‘TAU 465H’ on February 2nd 1970. Resident in Northern Ireland thereafter, the Jaguar was treated to a thorough engine and gearbox overhaul by Oldham & Crowther of Peterborough at an indicated 70,644 miles before being bought by the television and radio star Noel Edmonds as a present for his first wife Gillian during 1978. Checked over by J.R. Etheridge Ltd who looked after Mr Edmonds’ Ford GT40 at the time, the E-Type bore the distinctive number plate ‘CIA 7’. Belonging to Mr C Metcalfe of Milton Keynes by 1984, the two-seater then passed to Paul Conway who kept it for over twenty years. Small bills Garage of Chiswick carried out a full mechanical and body inspection on the car at an indicated 86,171 miles in September 1986 concluding that: ‘Apart from the corroded sills this vehicle is a fine example of a sixteen-year-old motor car’. Minor bodywork restoration and a full respray in its original Red followed during 1990 but, unusually for a home market car, the Series II Roadster has never been allowed to deteriorate to the point of needing total renovation. Thus, it retains its original chassis plate, carburettor position tags and jack bag etc not to mention its factory-fitted engine. Having owned several E-Types in the past and as a veteran of various Concours restorations, the vendor purchased chassis 1R1508 from marque specialist Lanes Cars for £90,000 in 2018 with a view to returning it to showroom condition once more. However, another project intervened and he now feels that someone else should take custodianship. Re-trimmed at some stage, the Jaguar remains presentable and could certainly be enjoyed ‘as is’ especially given that the seller has just spent £1,927.20 with Aldon Automotive of Brierley Hill having the radiator flushed, one cooling fan motor renewed, new coolant hoses fitted, the triple SU carburettors overhauled and electronic ignition added. Starting readily upon inspection and running well during our recent photography session, ‘ABW 88H’ is more authentic than many of the E-Types we encounter. Understood to have covered some 102,000 miles from new, this rare and appealing Series II Roadster is offered for sale with a green logbook (showing Mrs Edmonds’ ownership), old MOTs dating back to 1978 at 76,835 miles, numerous bills, factory hardtop and fitted indoor car cover.

Triumphantly unveiled at the 1961 Geneva Motor Show, the Jaguar E-Type created a furore thanks to its supercar performance, stunning looks and modest price tag. Early racing success at the hands of Graham Hill and Roy Salvadori amongst others helped cement the newcomer's reputation. Built as a monocoque with an engine cradling front sub-frame, the E-type's combination of all-around independent suspension and disc brakes allied to rack-and-pinion steering resulted in excellent roadholding and handling capabilities. The indomitable straight-six XK twin-cam engine supplied abundant power. If the design had an Achilles' heel then it was the recalcitrant Moss gearbox. However, Jaguar was quick to correct this shortcoming with a four-speeder of its own design just part of a continual programme of E-Type development that saw the model metamorphose through three Series. Introduced in August 1968, the Series II cars were distinguishable by their revised bumper and light arrangements. Less noticeable was the increased size of the front air intake that in conjunction with dual cooling fans made the Series II better behaved in hot weather and heavy traffic. With its 4235cc engine developing a quoted 265bhp and 283lbft of torque, it was reputedly capable of nearly 150mph and 0-60mph in 7.5 seconds. Available in open two-seater, fixed-head two-seater and fixed-head 2+2-seater guises, the American market accounted for the vast majority of Series II production. Indeed, just 776 of the 8,627 open two-seaters made were to right-hand drive specification.