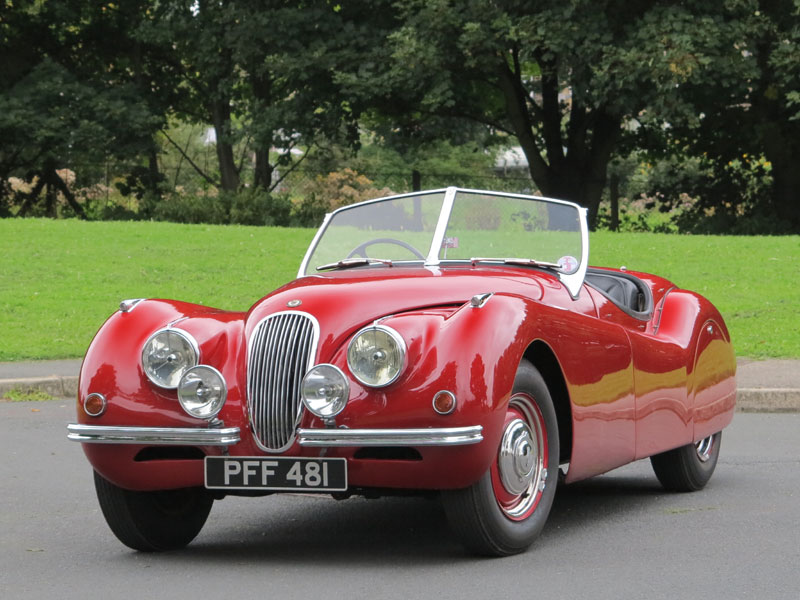 - The 126th XK120 Roadster made to right-hand drive specification

This handsome Red Jaguar was manufactured on the 7th of July 1950 and was the 126th righthand drive example of this iconic model to vacate the Browns Lane factory. Though not one of the original batch of all-alloy-bodied cars, it is nevertheless understood to have possessed its aluminium bonnet, doors and wings from birth. It was supplied new via Henlys of London and by January 1951 belonged to a Mr McDoughall of Australia, the country it remained in until repatriated in 1988; at which point it is believed to have benefited from a comprehensive restoration. The car is not new to H&H, having featured in our October 2000 sale.

The vendor acquired it in April 2008, after discovering it under a dust cover in the North Yorkshire Motor Museum. The following year he invested £4,937.41 in having the 3.4-litre engine overhauled by VSE, during which the cylinder head was replaced with another original one; as was the water pump, complete with 'spitfire' cooling fan. Subsequent replacements include: an alloy radiator with waterless coolant; brake cylinders; cloth covered wiring loom; high torque starter motor; Zircotec heat treatment for the exhaust manifold and new tyres all-round (2015). The vendor informs us that the Jaguar is as-original in all respects apart from an alternator with the period look of a dynamo'. He adds that 'the chassis is stamped in the correct places, as is the original Moss gearbox that works perfectly. In summary - it's a nice honest XK that drives very well'. He is offering it complete with 'good' hood, side screens, rear wheel spats, tailored car cover and what is believed to be the original registration number - 'PFF 481'.
Share this page: