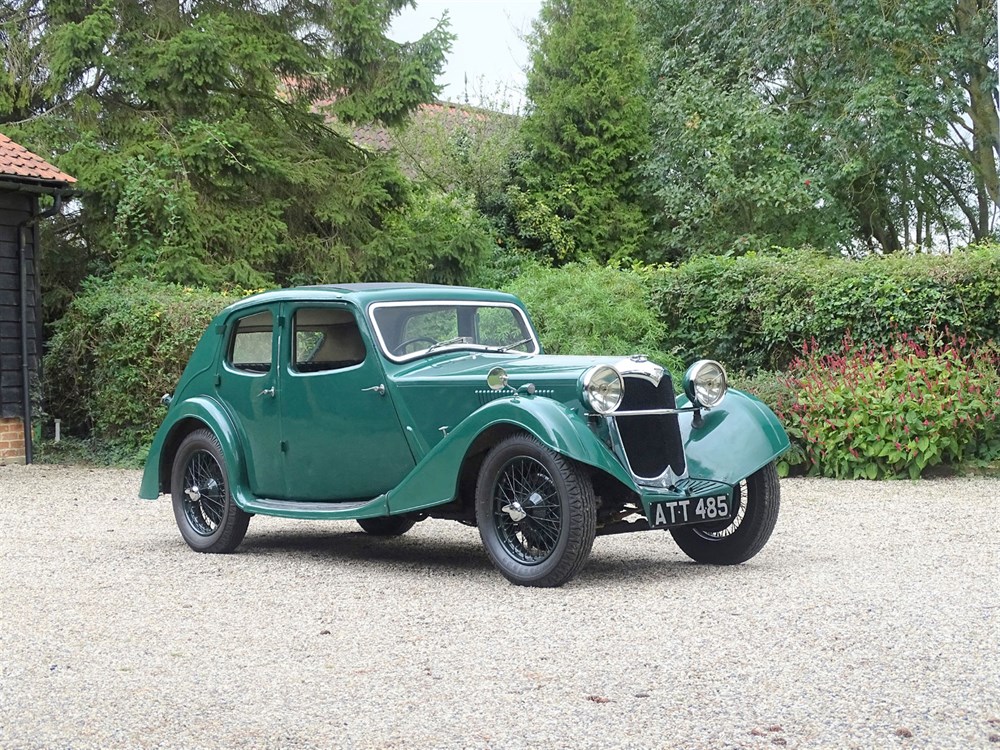 - Gone through and much improved during the current ownership. Wonderful patina and MOT tested until July 2020


First registered as `ATT 485' by Devon County Council on 25th January 1935, this handsome Riley had a green continuation logbook issued via the same authority some thirty-four years later. Briefly resident in Warwickshire, Northamptonshire and Herefordshire thereafter, the Kestrel was bought by John Edward Powell of Presteigne on 29th May 1970. Belonging to Mr Powell for no fewer than forty-two years, the Four-Light Saloon had its chassis and wheels shotblasted in 1973 and was treated to a thorough engine overhaul by Cleobury Garages Ltd the following year. Assorted old MOT certificates on file suggest that `ATT 485' has covered just 6,000 miles since 1982 (the current odometer reading is c.49,700). The subject of a road test article in the June 19th 2013 issue of Classic Car Weekly which commented: `There's considerable charm and charisma . . . The patina throughout is wonderful, with that heady and intoxicating old car whiff of ancient leather and timber . . . Fourth gear comes up quickly as the Riley bowls along perfectly at ease with 21st Century speeds', the Kestrel has had its road manners improved still further during the current ownership. As well as a thorough service, `ATT 485' has benefited from attention to its electrics, suspension, brakes, tyres, carpets, fuel system, dashboard and chromework etc. Starting readily upon inspection, this decidedly elegant and rare 22T Four-Light Saloon is offered for sale with history file and current MOT certificate valid until 30th July 2020.

Among the best-looking pre-WW2 British saloons, the Riley Kestrel debuted in 1933. Boasting a `double dropped' chassis with inter axle seating and `Aero Line' styling, the newcomer was powered by a variety of four and six-cylinder engines ranging from 9hp to 15hp. Highly capable and stylish, the 12/4 Kestrel was capable of over 70mph with many enthusiasts preferring the Four-Light `22T' version over the later and heavier Six-Light model.
Share: