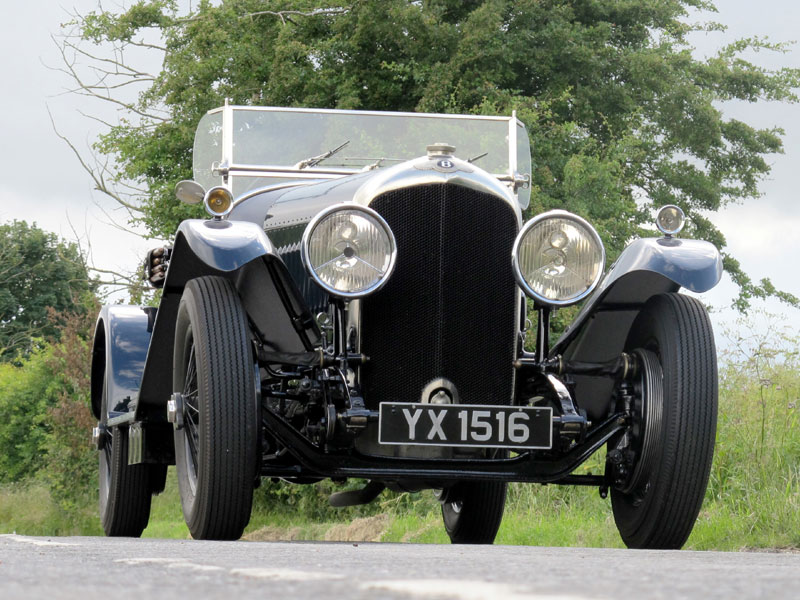 Originally fitted with Harrison four-seater tourer coachwork and supplied new to Edward Forsyth of Ormonde Mansions, London, chassis PM 3259 was road registered as 'YX 1516' on 11th July 1928. Expiring a decade later, its Factory Service Record lists engine number PM 3258 and D-Type gearbox number 7095 as well as mentioning various other custodians namely: B. Ayrton of London, R. Pershouse of Aldeburgh (Suffolk), B. Ayrton again, George Miller of Radlett (Herts), B. Unite of London and P. Knott of Berkhampstead (Herts). Interestingly, the same document reveals that the Bentley had its frame and track checked over following an accident in October 1932 (the impact perhaps explaining why the current headlamps are chrome- rather than nickel-plated).

Belonging to R.G. Leighton of Kings Heath, Birmingham by 1947 who described it as an open four-seater when joining the Bentley Drivers' Club, chassis PM 3259 was sold on sometime between 1950 and 1955. Next appearing on the BDC's radar during 1960 when Clive Compston Russell-Vick became a member, it was noted at the time that an unknown person had "removed the VdP (sic) body & she has been aborted"!! The BDC's Honorary Legal Advisor for many years, Russell-Vick not only used 'YX 1516' as everyday transport but also raced it in numerous domestic (and Continental) Club events - hence the Alfin drums that it retains to this day.

Sold to the vendor by Russell-Vick in c.1985, the Bentley was a non-runner and wore a crude but lightweight tourer body at the time. Extensively restored over the last three decades, the car's present coachwork has been crafted by James Pearce of Wisborough Green, Sussex (well known Bentley restorers); the same firm being responsible for its interior trim and windscreen. Fitted with a replacement B.M. Russ Turner block and fettled by Tony Fabian, the 4.5 Litre engine has also benefited from new pistons, valves and guides not to mention a new ceramic sealed water pump and fresh clutch fitted two years ago. We understand that only around 2,000 miles have been covered since the mechanical work was completed.

A recent inspection of the car by Philip Strickland confirms that the chassis has the correct numbering and appears totally original, with side rail stringers retained. The camchest and crankcase are both original as is the cross shaft housing. A Smiths starter of original pattern is present. Ignition is by coil and twin distributors (Russell-Vick having removed the magnetos). Reproduction twin SU sloper carburettors are fitted to an original inlet manifold, and the car has an original pattern flywheel with early cone clutch assembly and clutch stop. The steering column is original to the car being stamped PM 3259. The original Autovac is present along with the correct-type water pump and original pattern new cast exhaust manifold. The chassis number, engine number and bonnet stampings are correct and apparently original. The front and rear axles also appear original and correct. Desirable self-wrapping front brakes are fitted. The gearbox is of the correct 'D' type although we are unable to confirm if it is the original unit - our road tester noting it was "a delight to operate". An original 16-gallon fuel tank with all correct fittings is present. Well-base 20-inch wheels shod with 6.00 x 20 Firestone tyres, all very good, including the rear-mounted spare are fitted.

The hood is easily erected and mounted on wood hoops. The non-original dashboard carries the usual array of correct Jaeger and Smiths instruments, household-type switches and a correct and apparently original switch plate.

During a recent road test the car behaved very well with no apparent vices, the engine starting readily, registering 50psi at tickover and proving lively and quiet with good acceleration and strong pull from low revs.

A most desirable, 'matching numbers' car, retaining its original registration number, ready to be enjoyed by a new discerning owner, chassis PM 3259 displays all the quintessential vintage Bentley qualities of durability, strength and power.

H&H are indebted to Alan Bodfish for his research into chassis PM 3259's history and to Philip Strickland for inspecting and testing the car. Our grateful thanks to both.
Share: