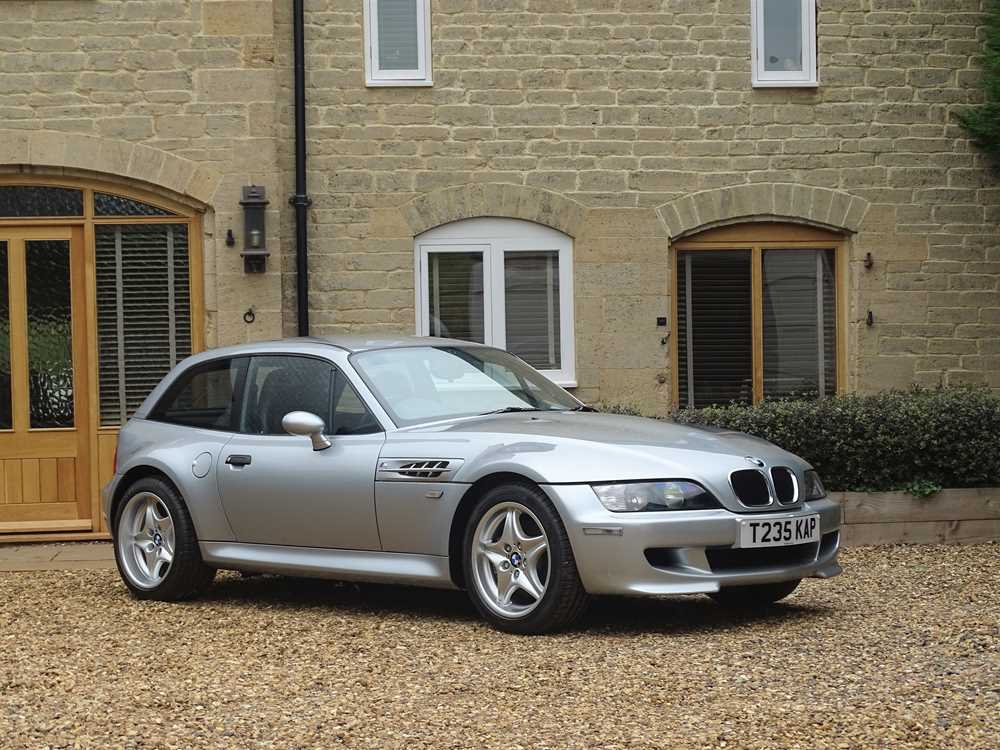 ‘T235KAP’ represents a rare opportunity to acquire an extremely low mileage example of the iconic Z3M Coupe as the car offered today has covered just 646 miles from new in the hands of the vendor and three former keepers (the first two recorded keepers being of the same family). Supplied new by Blue Bell BMW of Crewe, it has been with the vendor since 2016 and was last serviced in 2019. Finished in Arctic Silver and fitted with genuine AC Schnitzer pedals, it is offered with an original sales brochure, original book pack with handbook and service book, two keys and a collection of old MoTs. We are informed this true collectors’ BMW will be freshly serviced in time for the sale and offered with a fresh MoT certificate. It is no surprise the vendor currently grades the engine, transmission, electrical equipment, interior trim, bodywork and paintwork all as ‘excellent’.

The M Coupé, manufactured from 1998 until 2002, was developed under the leadership of engineer Burkhard Göschel with the intention of adding increased torsional and structural rigidity to the Z3 roadster's chassis. The development team initially struggled to get the Board of Directors at BMW to approve the model for production, but it was eventually given the thumbs up so long as it remained cost-effective to produce. To help achieve this, the majority of the body panels needed to be shared with the M roadster, thus the doors and everything from the A-pillar forward are interchangeable between the coupe and roadster, as are most of the interior parts. The Z3 coupe, which combined the M coupe's body with the standard Z3 drivetrain, chassis and cosmetics was also approved for production at the same time. Production of the M Series cars commenced in 1998 at BMW’s Spartanburg plant in Greer, South Carolina, USA, with some of the major components such as engines and transmissions being imported from Germany.

Up until the 2001 model year the Z3M Coupe and Roadster were powered by the same engine to be found in the E36 M3. Most countries initially receiving cars with the 3.2-litre version of the BMW S50 engine, while for the North American market the less powerful BMW S52 engine was utilised. The S50 developed some 316 hp at 7,400 rpm and 260 lb ft torque at 3,250rpm, a run of 2,999 cars being produced with this unit.

As with the Z3 model, the M Coupe’s suspension features MacPherson struts at the front and semi-trailing arms to the rear. Compared to standard cars, however, the M series included modifications such as wider front and rear track, reduced ride height, modified front suspension geometry, firmer springs and shock absorbers, thicker anti-roll bars, stronger semi-trailing arms together with a reinforced subframe.

The brakes from the E36 M3 were also carried over, these being vented discs measuring 315.0 mm on the front and 312.4 mm on the rear. In most countries, the front discs were a two-piece ‘floating rotor’ design. Power was transmitted via a ZF Type C 5-speed manual gearbox whilst a limited slip differential with a maximum locking of 25 percent was fitted as standard. With its semi-retro looks and high performance the Z3M Coupe offered a useful level of practicality over its Roadster sibling making it, in our opinion, the model of choice for enthusiasts.