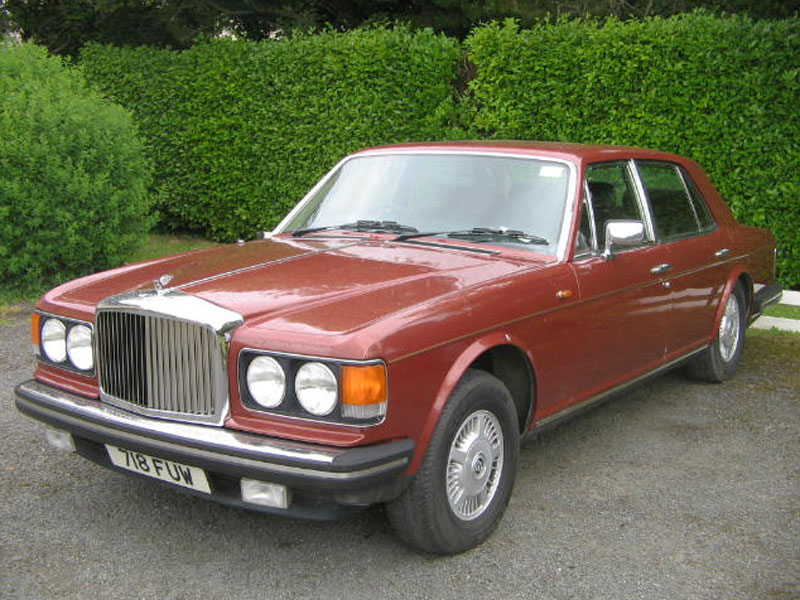 A square-cut, broad-shouldered design, the Bentley Mulsanne was styled in-house by Austrian-born Fritz Feller and drew its name from the fastest section of the Le Mans race circuit on which Bentley triumphed no less than five times between the World Wars. Introduced at the 1980 Paris Salon, the newcomer enjoyed notably greater road presence than its T2 predecessor as well as a thirty percent larger glass area. Thus, while it looked suitably imposing from the outside, internally it proved pleasantly airy. Although based on the T2 floorpan, the Mulsanne offered considerable improvements in both ride and handling, thanks to its new Girling automatic ride height control and gas dampers. By combining copious amounts of sound deadening with the finest quality upholstery, Crewe's engineers kept intrusion from the 6.75-litre V8 engine and three-speed automatic transmission to a muted hush (unless the model's reputed 120mph potential was fully explored). Just 482 Bentley Mulsanne Saloons are thought to have been made between 1980 and 1992.

The vendor of '718 FUW' informs us that this right-hand drive Mulsanne was in fact the first example of the model to leave the production line (and cites correspondence from Bentley as proof). It has Copper-coloured coachwork and a Brown velour interior. Our resident sleuth informs us that the vendor is in fact the grand-nephew of Sir Arthur Conan-Doyle who, having assessed the Bentley, gives the bodywork a score of "8 from 10" (apparently there are postage-sized rust spots on the bonnet and by the back window), considers the engine and interior trim to be "excellent" (with the exception of the driver's matt), and rates the paintwork and three-speed automatic transmission as "very good". He also notes that the windscreen has a crack in it. According to the odometer, the Mulsanne has covered some 165,000 miles to date and is coming over from Southern Ireland especially for the sale.

PLEASE NOTE: The exhaust on this vehicle is blowing.
Share: