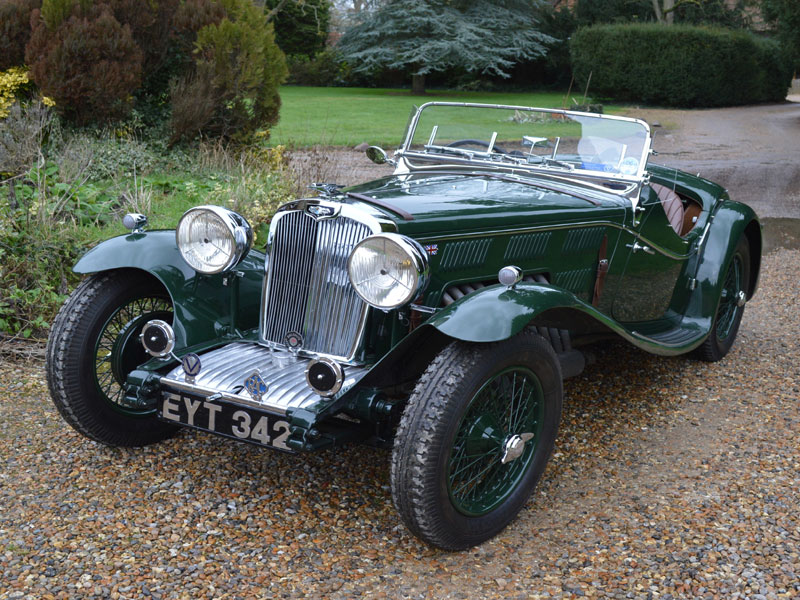 This magnificent-looking motorcar was recently created in honour of the trio of Dolomite Straight 8s Triumph produced in the 1930s - their history explains the significance of the car now offered.

Donald Healey, having been largely responsible for the Imp and MPH models whilst at Riley, joined Triumph in 1933 and persuaded his new chairman, Lieutenant Colonel Holbrook, to manufacture a prototype sports car at least the equal of anything then available, as many British enthusiasts - Earl Howe 'Tim' Birkin, Tommy Wisdom and Healey himself among them - wanted the all-conquering Alfa Romeo 8Cs quashed. Birkin and BRDC President Earl Howe in particular, publicly criticised the lack of a British sports car capable of taking on the continental opposition.

As Alfa's 8C 2300 was the benchmark, Healey unsurprisingly based his first prototype on that design. In fact it is believed he purchased a year old Monza (chassis 2211130 or 2211125) and stripped it so the dimensions could be recorded. Healey also travelled to Milan to discuss the project with Vittorio Jano, who was reportedly delighted that so famous a marque as Triumph wished to adopt their design. It was even mooted the car could be dubbed the Triumph-Alfa. However, a combination of the costs associated with the Dolomite's hi-tech specification and Triumph's perilous financial status caused the project to be abandoned in 1936. Of the three Straight 8 prototypes produced, two are in private hands, while the third was destroyed on the 1935 Monte Carlo rally with Healey at the wheel - it clashed with a train at a level crossing; happily Healey and his co-driver escaped with only minor injuries.

Scroll forward to today and to Rob Green of Gloria Coachworks who has become arguably the world's leading specialist in pre-1940 Triumph's and restored and re-created many examples of the marque. These have included two evocations of the aforementioned Dolomite Straight 8 and the second, Rob's own, is the stunning Triumph now offered. It is based on a 1938 Dolomite chassis and features all pre-1940 Triumph running gear. It is powered by a Dolomite straight-six engine fed by triple SUs and an ingenious siamesing of the exhaust manifold results in eight fully functioning pipes exiting the bonnet, much as per the original cars. The drawings for the Straight 8 prototypes were destroyed in the blitz, so accurate replicas had to be created from period photos. The resulting coachwork was hand crafted in aluminium over an ash frame and includes a modified Gloria bonnet and genuine period Ace spare wheel cover. The evocation abounds with delightful touches, such as the hand modified Dolomite radiator badge that once read Gloria but now spells Dolomite - a detail believed to have been unique to the three original cars. The windscreen folds down to expose a pair of aero screens for those more sporty moments behind the wheel.

'EYT 342' is finished in Green and trimmed in Brown hide, and comes with a matching Green tonneau and hood. The jack and tools are neatly stowed within storage compartments on the engine bulkhead. The vendor informs us that the Triumph 'starts easily, is a delight to drive and revels in spirited motoring'. This splendid motorcar represents 2,700 hours of skilled labour, and Rob apparently has no plans to construct further examples, making this a unique opportunity to acquire a fine example of automotive art at a fraction of the build cost.
Share: