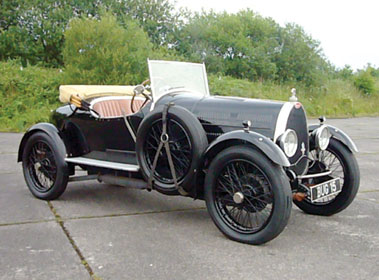 "Light cars as a class are surprising to those accustomed only to heavier boats; but the Bugatti holds revelations for those even well-accustomed to light cars in general. The suspension is uncannily perfect. The steering is a delight. The response to the spur makes one forget the lightness of the whole outfit; but the craft embodied in the complete make-up is such that a very tyro could come down off the banking on the forward side of the Members' Bridge at Brooklands well up in the 70s, and yet hit the Railway Straight without anything in the way of alarm" (E. Duffield, Automotor Journal, April 1921).

The interrelated Types 13, 22 and 23 were the cars which established Bugatti's reputation as one of the world's pre-eminent sportscar manufacturers. Known as Brescia Bugattis following the virtuoso 1-2-3-4 finish achieved by a highly tuned quartet of their siblings at a Voiturette race held in the Italian town of the same name during September 1921, the diminutive Molsheim machines became synonymous with class-leading performance and matchless agility. Available from 1923 onwards, the Type 23 `Brescia Modifie' was based around a lightweight chassis frame equipped with all-round leaf-sprung suspension (semi-elliptic front / reversed quarter-elliptic rear) and two-wheel brakes. Differentiated from its similarly `modified' Type 13 and 22 siblings by a longer 2.55 metre (100.4in) wheelbase, it was powered by the same 1496cc (69mm bore x 100mm stroke) 16-valve SOHC four-cylinder engine allied to four-speed manual transmission. With some 40bhp @ 4,000rpm on tap thanks to such race-proven niceties as a three-bearing crankshaft (two ball / one plain) and four valves per cylinder, the Type 23 `Brescia Modifie' was reputedly capable of up to 80mph. And while achieving such high speeds was coachwork dependent, it is sobering to think that front wheel brakes were only introduced on the model in 1925.

According to the accompanying report by independent Bugatti consultant David Sewell, this particular example was invoiced by the factory on 11th March 1926 for delivery in rolling chassis form to their Paris Agency's showrooms on the Champs Elysees. Sold to an Australian visitor named MacGregor Murray Scott from Wallendbeen, New South Wales for the equivalent of £185, chassis number 2840 is reputed to have been hurriedly fitted with wickerwork seats and steel mudguards before being driven to London via Calais. Used for some light touring duties around Britain, the Type 23 `Brescia Modifie' was then loaded onto a ship bound for Australia. On approaching Sydney Harbour the wickerwork seats and steel mudguards are understood to have been quickly jettisoned so as to avoid paying the prevailing high rate of duty on imported coachwork. Entrusted to local coachbuilders B.G. Clothier of Petersham near Sydney, the Bugatti gained a handsome Grand Sport-style roadster body (complete with an occasional seat compartment above its back axle). Something of an amateur racing driver, `Mac' Murray Scott apparently piloted chassis 2840 in various local hillclimbs and trials accruing a smashed headlight and broken windscreen pillar in the process; though some light damage to the radiator was blamed on a fog bound bovine collision!

Unable to accommodate the growing Scott brood, the 2+1 seater was laid-up on the family farm for approximately twenty years between 1940 and 1960. Roused from its hibernation for the Cootamundra Centenary Procession, the `Brescia Modifie' was left to slumber again until 1965 when it was inherited by Murray Scott Junior. Suitably recommissioned, chassis 2840 took part in the inaugural Great Australian Bugatti Rally during June 1966. The subject of various running repairs thereafter, it also participated in 640-mile Bugatti Rally at Mildura some six years later. Failing on the way home with sticking valves, the Roadster was treated to extensive restoration work during the mid-1970s but although the chassis was successfully revitalised the engine remained sick. Relinquished by the Scott family to Ron Hunter of New South Wales, it had a further Australian keeper, John Thompson (also of New South Wales) prior to arriving in the UK during the late 1980s. Registered as `DS 7656' to J.P. Evans Esq of Shrewsbury, the `Brescia Modifie' then passed in quick succession to Bob Wickham of Cullompton (1989), Dr Roger Parker of Oxford (1990) and Phil Taylor of Somerset (1992). The latter embarked upon a very thorough mechanical and cosmetic refurbishment including an engine overhaul during which the original cylinder block, valves, valve springs, valve guides and pistons were replaced. The tail section also appears to have been re-panelled although it is unknown whether it was Mr Taylor or another custodian who was responsible. With work still ongoing chassis 2840 was bought in 1999 by Jack Light who, together with his close friend Paul Tillion, had the car repainted, re-trimmed and generally finished off.

Entering the current ownership via dealer Gavin McGuire some three years later, the Bugatti has since formed part of a small collection of Veteran and Vintage motor cars. Following a first-hand inspection, David Sewell judged that: "The chassis frame is standard Type 23 in all respects, and is identified by the car's original brass factory chassis plate attached to its cast aluminium bulkhead confirming it to be Chassis Number 2840 . . . The front axle beam is the correct heavier-section type as suitable for front wheel brakes, and is numbered 524 in the usual position, centrally on top . . . The brakes and all the steering arms and links are original whilst the steering box, integral with the engine crankcase is numbered 38 . . . The engine crankcase is stamped with the chassis number 2840 on the raised boss on the front bearer arm, confirming that it is original to this particular chassis. The corresponding engine number 1288 appears as usual . . . it is clear that the engine retains its major non-ferrous castings . . . The engine retains its original Marchal-Vaucanson starter motor and dynamo . . . Ignition is correctly provided by a single standard S.E.V. B4 magneto . . . whilst carburetion is supplied by a Solex 35MV carburettor, a contemporary equivalent to the correct 36DEF Zenith unit . . . the original casing of the gearbox is numbered 1443, consistent with the car's engine number . . . The car definitely retains its original pointed-tail body although various ancillaries, notably the louvered bonnet, the cycle-type mudguards, the windscreen frame and the running boards have been either modified or changed over the years . . . The dashboard displays a full range of refaced original instruments including a 6,000rpm Jaegar tachometer, 80mph speedometer and four day clock".

Mr Sewell summarised his findings as follows: "This car is remarkably original in respect of both its major mechanical components and its bodywork. Indeed, only the cycle-type wings and the modified windscreen frame cause the car to differ significantly from its appearance immediately after it was first bodied in 1927. Also there are very few, and then only minor, detailed deviations from its original mechanical specification". Well recorded in various Bugatti Owners' Club Registers from 1962-2000 (W2, W3, A1, A2, UK2), the `Brescia Modifie' is accompanied by a spare magneto, selection of tools and history file containing many period and more recent photographs. Still highly presentable and benefiting from a more modern dry-plate clutch, chassis 2840 is only coming to market due to the vendor's increasing passion for steam-powered Veterans. Driven less and less over the last couple of years, the Bugatti is running notably rich and would undoubtedly benefit from the ministrations of a specialist. Feeling somewhat hesitant on a recent outing and emitting a noise from its back axle that would warrant further investigation, the Type 23 has nevertheless just passed a recent MOT test. A very attractive and seemingly highly original motor car, this charming Brescia Bugatti is worthy of close inspection.
Share: