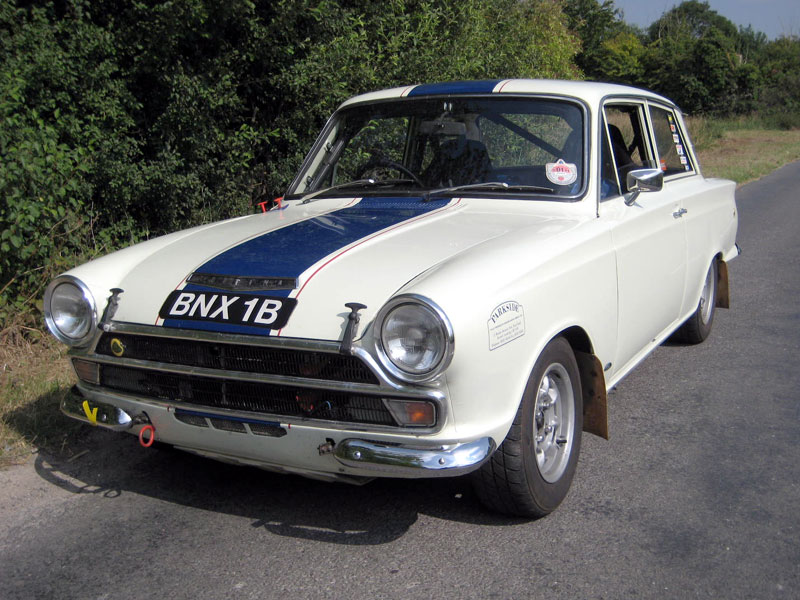 Ford were looking to race the MKI Cortina in the Group 2 category, for which 1,000 'homologation specials' would be required. The obvious powerplant was the twin-cam version of the ubiquitous Ford 'Kent' engine that Lotus genius Colin Chapman had already developed for use in the Elan. A deal was struck and the Lotus Cortina was born in 1963. The car was based on the two-door Cortina. In addition to the fitting of the 105bhp 1558cc twin-cam engine, the changes included: a close-ratio gearbox, shorter front suspension struts, and trailing arms and coil springs with 'A' bracket at the rear. Wider 5.5J steel wheels were added, lightweight aluminium panels used for the doors, bonnet and boot and quarter bumpers added to the front. Interior amendments included: a new centre-console to house the remote control gear lever, different seats and facia, and a wood-rim steering wheel. The MKI model was made until 1966, during which time the most significant upgrades included the adoption of Ford's new 'Airflow' ventilation system and the replacement of the troublesome 'A' bracket rear suspension with leaf springs and radius arms.

The 1966 right-hand drive car offered was rescued from the rear yard of the Cambridge Lotus dealer, Daytune, in 1998, where it had been stored in the open for about twenty years. 'STW 638D' then underwent a major restoration by Parkside Motors, during which it was transformed into a top specification historic rally car and given the cherished number plate of 'BNX 1B'. The bodyshell was seam welded, gusseted and the suspension mountings braced. The current engine is an FIA specification Racing Fabrications 172bhp twin-cam unit. It drives through a 2000E close ratio, all synchromesh Quaife gearbox via a two piece propshaft to a 4.9:1 limited slip differential linked to heavy duty half shafts. Both engine and gearbox were refreshed in 2005/6, and the car has only run at two single venue events since. The extensive specification includes:
- heavy duty alternator
- electric fan
- twin coils
- dual circuit brakes
- twin fuel pumps
- rev limiter
- up-rated radiator
- Leda tarmac (and gravel) suspension
- passenger footplate with horn button
- extended fly-off handbrake
- fuse panel on dash
- under-bonnet light
- helmet hammock
- Halda Twinmaster

This lovingly prepared Lotus Cortina is finished in White with a Blue stripe and comes complete with plenty of history (including an outright win on the Premier Stages event) and both MSA Vehicle Identity and MSA Stage Log Book.
Share this page: