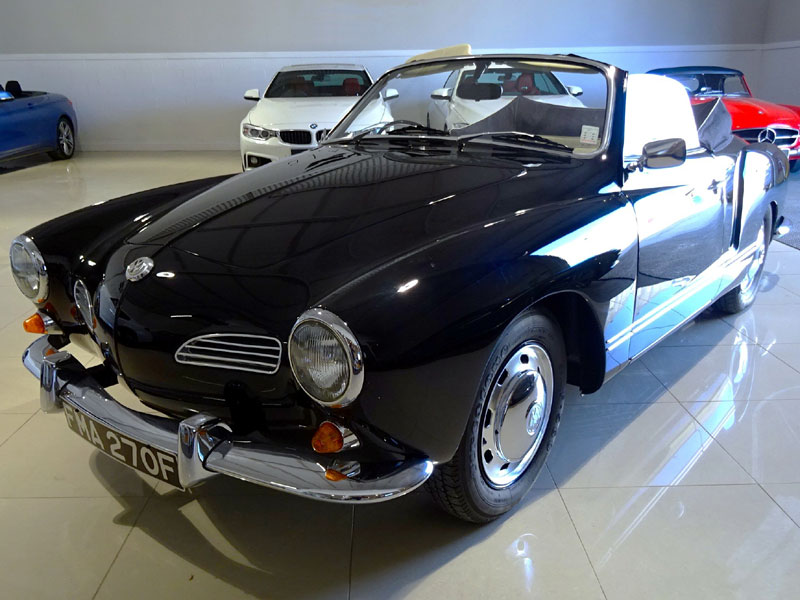 - The nicest example we have encountered and subject to a highly detailed, bare metal restoration

- Offered with an extensive history file and worthy of close inspection

'FMA 270F' is quite simply the finest Karmann Ghia we have ever encountered and its comprehensive history file contains letters from both the Owners' Club and an independent marque specialist showing they have been similarly impressed. It was manufactured to right-hand drive specification on April 2nd 1968 and delivered new to the USA on June 5th that year. It has also spent a number of years in Ireland and was evidently still a nice example before being treated to a fastidious, 'no expense spared nut and bolt restoration' a few years ago, for which the body is understood to have been removed from the floorpan - a length to which few Karmann Ghia refurbishments are taken. The shell was then shot blasted back to bare metal before being expertly repainted in its original Black livery. The interior was retrimmed to an equivalent standard in Cream-coloured hide. Both the vendor and marque expert Martin McGarry of the Karmann Ghia Motorworks have no hesitation in now classing the bodywork, paintwork, interior trim, flat-four engine and four-speed manual transmission as all being in 'excellent' condition. This remarkably original, immaculate, matching numbers Volkswagen is now offered complete with Heritage Certificate and MOT valid to September 13th 2017. An amazing opportunity for the Karmann Ghia fraternity the world over.

Particularly aimed at the American market, the immortally striking Karmann Ghia 2+2 was Volkswagen's answer to creating a halo model for its unashamedly austere Beetle range. Available in both Coupe and Convertible guise, it was styled by Luigi Segre of Carrozzeria Ghia and hand-built around Beetle mechanicals by the famed German coachbuilder Karmann of Osnabrück - hence the name. German production ran from 1955 to 1974, during which 445,238 examples were built, of which 364,401 were Coupes and 80,837 Cabriolets like the sales car. A further 41,689 were constructed in Brazil between 1962 and 1975.
Share: