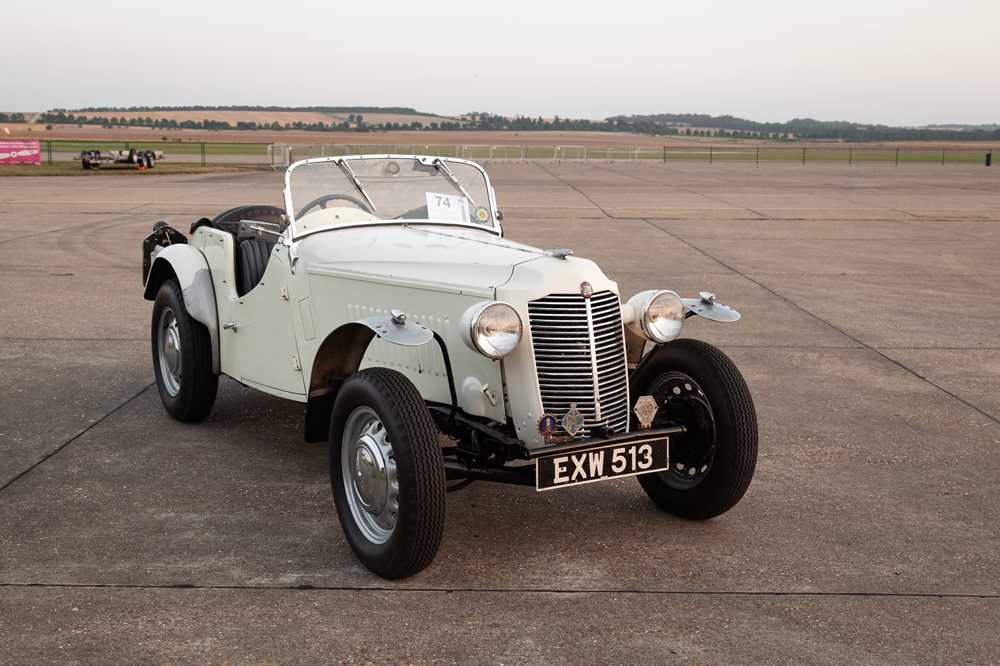 Starting life as a Bedford HC 10hp 5 cwt butcher’s van, this very successful trials special has a fascinating history that the vendor has been able to unearth since acquiring it in 1965. When the war was declared in 1939 the van was commandeered by the Government for active service. In 1942 it was returned to the baker with 20,000 miles recorded resplendent in a khaki color scheme. It was subsequently acquired by Cyril Crosby, a Vauxhall employee (foreman of the Experimental Engine Test Department) who had competed in motorcycle events since 1925 and was looking for a suitable donor in order to create a special that would be able to compete with Morgans and MGs in trials. He stripped the vehicle and sold off the body, replacing it with a Singer Le Mans body scuttle and two doors as the manufacture of a shell would have been difficult to build in his home workshop. An ash frame and remaining panels were constructed by him and his old sidecar passenger, who happened to be a skilled sheet metal worker, including the bonnet, windscreen frame and petrol tank. The chassis side members were modified and a cross member installed that allowed the engine to be moved back some seven inches. A strong tubular cross member was added to the rear to cope with the twin-mounted spare wheels. The brakes remained standard although an MG fly-off handbrake was modified and fitted as well as a remote-control gear change. At first, the original engine of 1203cc was retained but after being damaged in 1948 on a difficult trial stage it was replaced by a 1442cc 12hp unit bored out to 1489cc to get as close as possible to the 1500cc maximum permitted. A non-standard cylinder head for use with Rover flat top pistons was fitted and shorter pushrods were installed to cope with the 6,000-rpm potential as opposed to the standard unit’s 3,800 rpm. A new inlet manifold and special exhaust system were also fabricated. A Marshall Rootes-type supercharger was added giving a 6psi boost allied to a 1 ¼ inch SU carburetor. The engine was repositioned to give as near as possible perfect weight distribution and neutral handling characteristics for both circuit and trials work.

In competition trim the car weighed in at 1800lbs which was about equal to the MG T Type two-seaters it regularly competed against. Between 1947 and 1955 it was entered in numerous events and was extremely successful gaining many class awards and outright first places including 1st 1948 MCC Exeter Trial, 1st 1949 MCC Land’s End Trial, Triple Award 1950 Land’s End Trial, 1st 1952 Land’s End Trial, 1st 1952 1-hour Silverstone, 1st 1953 Land’s End Trial etc. A detailed list of its awards is contained in the accompanying history file. Mr Crosby eventually sold the car in the mid-1950s and the vendor purchased it from a lady in Luton in 1965. On passing her driving test she had asked her husband for a sportscar and was said to be somewhat in awe of the available performance! By now the car had deteriorated and a considerable amount of work was needed to restore it properly although this was mainly mechanical as the body had remained in good order. Before work commenced Mr Crosby got in touch having heard about the project and some of the gaps in its story were filled. Upon completion of the mechanical side the body color was changed from red to white, the seats welded in and refurbished, and the chrome work replaced. No longer campaigned in trials, it was enjoyed on the road and became a regular on the Kent vintage rally circuit.

A detailed history file is offered with the car including Swansea V5C, photos of it competing in the period, assorted invoices, correspondence including a letter from its builder Cyril Crosby dated 1980 giving details of the specification and build, magazine articles from the 1940s, a list of awards achieved, buff logbook, repair and service manual, Bedford van instruction book, book of the Vauxhall Fourteen Velox and Twelve-Six and rally plaques from the early 1970s. The vendor now summarises the car’s condition as having “average” bodywork, “very good” engine and “good” electrics, transmission and interior trim. As an appealing and successful trial special with a known and fascinating history, EXW 513 is now ready for the next chapter in its interesting life.