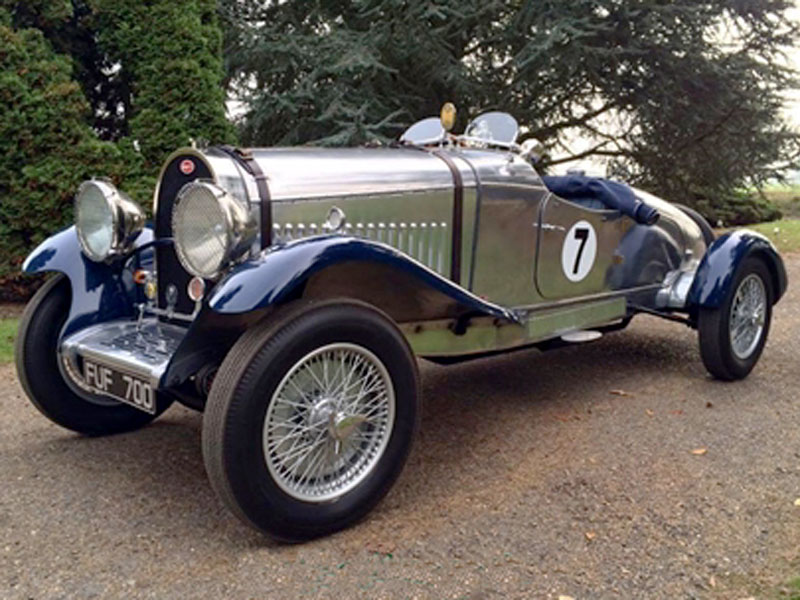 Complete with polished alloy bodywork, bonnet straps, monogrammed radiator cap, aeroscreens and suitably massive Lucas P100 headlamps, this evocation of a Bugatti Type 50 Grand Sport is bound to turn heads wherever it goes. In fact it was a model Bugatti designed but never made, and `FUF 700' was created from the original 1934 plans and photographs (copies of which form part of the car's history file). The chassis was constructed by a Bob Lewis and the ash frame by a Bob Jones, while the striking aluminium coachwork was fashioned by Vintage Wings of Manchester. Evidently it took several years and some £40,000 to get to that stage and, following additional expenditure, Tim Perry of TJP Classic Services completed the project in 1992.

The recreation is powered by a fully-refurbished Nissan L20A straight-six engine dating from 1976 - it is the type normally found in the Datsun 240Z and 510 and Nissan Laurel and Maxima, and is known for its reliability, durability and parts inter-changeability. The unit has been cosmetically modified and the turned aluminium engine bay detailed in order to add period flavour to the vehicle - twin radiator fans assist cooling in heavy traffic. Braking is by discs at the front and drums at the rear. Damping is by friction units up front and modern telescopic ones behind. The cockpit features French Racing Blue leather seats and door pockets, rosewood and turned aluminium dashboard, and brass-ringed instruments. Replica Bugatti pedals and gearknob complete the period impression.

Since completion, this splendid-looking evocation has driven just 3,900 miles and is now being offered complete with V5C (in which it is described as a Bugatti), and very large history file including the aforementioned plans and photos, plus a 1999 video tape of the press coverage gained when it first took to the road.
Share this page: