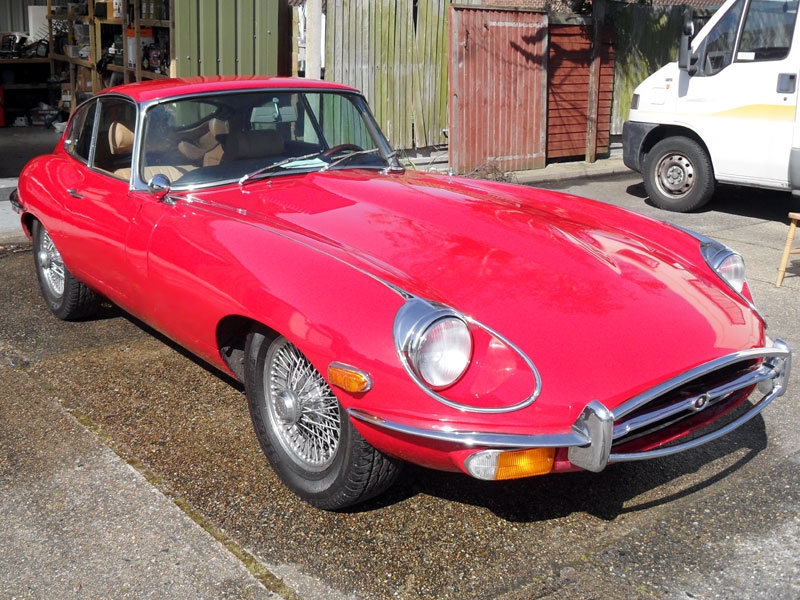 - Believed to have been sold new in America

- Reportedly having a recommissioned air conditioning system and retrimmed interior

Famously launched at the 1961 Geneva Motor Show, the Jaguar E-Type has become a motoring icon. Built as a monocoque with a front sub-frame to cradle the engine, its combination of all round independent suspension and disc brakes allied to rack and pinion steering gave it excellent road holding and handling capabilities. Introduced in 1968, the Series II cars were distinguishable by their revised bumper and light arrangements. Less noticeable was the increased size of the front air intake that in conjunction with dual cooling fans made the Series II better behaved in hot weather and heavy traffic. With its 4235cc engine developing a quoted 265bhp and 283lbft of torque, it was reputedly capable of nearly 150mph and 0-60mph in 7.5 seconds.

This left hand drive 4.2 Coupe is believed to have been sold new in America and was reportedly acquired by the vendor in early 2015 from a car dealer in Connecticut, USA. He was told that the car had been restored in around 2008 and that the previous owner had spent about $11,000 on a top-end engine refresh, the fitting of a stainless steel exhaust system and the fitting of triple SU carburettors, although the car arrived in the UK with no documents to support these claims. Upon repatriation in 2015 the E-Type was registered with the DVLA and various recommissioning works were reportedly carried out such as an overhaul of the air conditioning and braking systems, the application of five new tyres, and the fitting of a new leather and vinyl interior. The engine is described by the vendor as being in excellent condition with the remainder of the car described as being in very good condition with cold air conditioning. The file contains a copy of the Connecticut Title and the car has a valid MOT certificate that expires in August 2016.

PLEASE NOTE: The vendor has informed us that this vehicle is accompanied by the original steering wheel, jack, tool kit, handbook and operators manual.
Share: