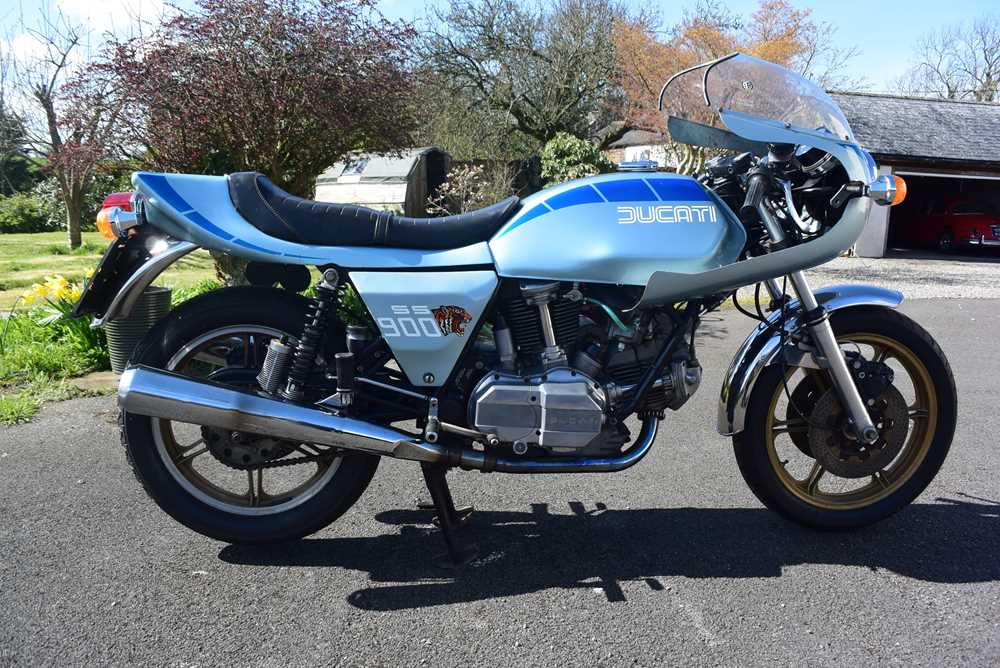 Ducati was established in 1926 by Antonnio Ducati and his sons, initially producing electrical components. After WW2 they moved into motorcycles with the Cucciola, essentially a pushbike with a clip-on engine. By the 60s they had become associated with performance bikes selling a range of sporty 250 and 350 singles. In response to the demand for larger capacity bikes chief engineer Fabio Taglioni designed the classic V Twin bevel drive engine first used in the 1971 GT750. This proved to be an immediate success, helped considerably by Paul Smarts win in the 1972 Imola 200 race. This started a tradition of race-winning V twins that have gone on to dominate World Superbike racing over the years.

The Leo Tartini styled Darmah model was introduced in 1977 and the SS version a year later. The SS was marketed as a 'Sports Tourer' blending the clip ons and half fairing from the 900SS but with a dual seat and a softer power delivery. With its two-tone blue paintwork and gold wheels it's one of the best looking bikes of the era. Information found online suggests there were only 1440 SSDs produced making it one of the rarest bevel drive twins. This example showing 19099 km on the clock was bought by the vendor whilst working in South Africa and imported by him on his return to the UK in 1990. The bike has not been used for a number of years so will need some recommissioning but is in good original condition with just a few blemishes in the paintwork and small cracks in the fairing. The vendor has recently fitted a new battery and has had the bike running. It comes together with its original South African registration documents including a number of tax discs and a current V5C. Still usable in modern-day road conditions it should make an interesting and fast appreciating classic.