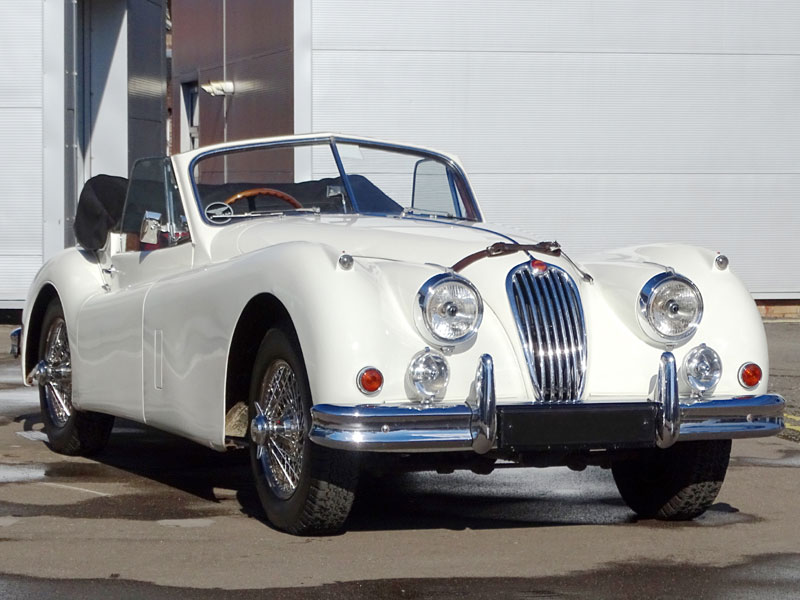 Launched at the 1954 Motor Show, the XK140 boasted the same bewitching styling as its forebear but allied it to a host of important mechanical improvements. Chief among these was the adoption of rack and pinion steering. Though, the fitment of telescopic shock absorbers (in place of the XK120's antiquated lever arm dampers) also had a noticeably beneficial effect on handling / roadholding. With its engine and bulkhead repositioned three inches further forward, the new model enjoyed a notably roomier cabin (the fixed and drophead coupe variants gaining occasional rear seats as a result). Available in 'standard', 'special equipment' or 'special equipment plus C-type cylinder head' guises, power and torque outputs ranged from 190bhp / 210lbft to 210bhp / 213lbft. Distinguished by its one-piece bumpers and simpler, more imposing radiator grille, the XK140 was among the fastest cars of its generation. Reputedly capable of over 130mph, it focused public consciousness on Jaguar's continued success at Le Mans (the Coventry marque winning the endurance classic in 1951, 1953, 1955, 1956 and 1957).

According to its accompanying Jaguar Daimler Heritage Trust Certificate, this particular example - chassis S817502 - was factory finished in Cream with Red leather upholstery and a Black hood. A Special Equipment model, its original specification also comprised a C-Type cylinder head, twin exhaust system, wire wheels with centre-lock fixing and twin fog lamps. Dispatched to Max Hoffman's famous New York dealership on 18th June 1955, the Jaguar is known to have belonged to Florence Caruso, Richard Reitter and Herbert Simms amongst others whilst Stateside. Repatriated as a stalled project during 1988, the XK140 was first UK registered as 'TSK 491' on May 1st 1992 to Anthony Jackson of Henley-in-Arden by which time it had been extensively restored including a conversion from left- to right-hand drive. Briefly belonging to Stephen Murphy of Wolverton, the Drophead Coupe was acquired by its previous keeper William Brown of Colton on October 13th 1994 for £34,500.

In total Mr Brown spent over £45,000 improving and fettling the XK140 between 1994 and 2006 when it entered the current ownership. Thoroughly enjoyed by the vendor over the last eleven years, the Drophead Coupe is said to have proved very reliable consuming no more than a pint of oil during a tour through England, Scotland and Wales during 2016. Riding on 54-spoke wire wheels and benefiting from a recent smartening of its bodywork and paintwork, this much-loved Jaguar is offered for sale with a very large and detailed history file plus a spare set of body-coloured wire wheels.

PLEASE NOTE: This lot is currently undergoing a cherished number plate transfer. It has been inspected by a DVLA representative and is expected to be re-issued with the number plate 'TSK 491' shortly.
Share: