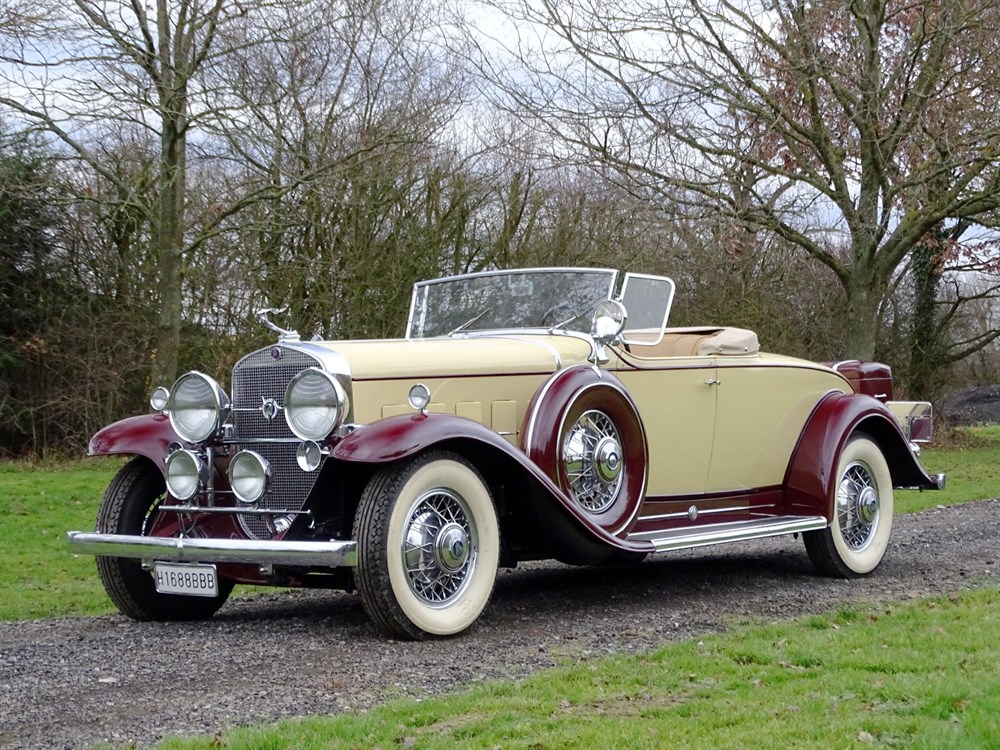 - Previously part of the Valencia Collection

Cadillac's response to the Wall Street Crash of 1929 was to come out fighting. Whilst the straight eight-cylinder engine had been standard in 1920s luxury sedans, Cadillac Chief Engineer Ernerst Seaholm tasked engine specialist Owen Nacker to create something that would stand apart and put Packard in their place. The result, unveiled at the New York Automobile Show on January 4th, 1930 was the phenomenal Series 452 V16, a massive car in every sense targeted at the very richest segment of American society. "Among automotive powerplants, it stands uniquely alone - not only the first of its kind to be produced, but also entirely unchallenged from the standpoint of its general excellence," as Cadillac put it in an advertisement of the day. In October that year, Cadillac unveiled the car's slightly less ostentatious partner, the Series 370-A V12. Although smaller in some respects, the car often outperformed the V16 in two areas that mattered: on the road and in sales from the showroom. Its target audience were further entranced in 1931 when the model was chosen as the pace car for the Indianapolis 500, and Cadillac sold 1,984 examples in the model's first six months. All in all, by the end of 1930, records show that $54m had been invested in the V16/V12 project, and it is rumoured that Cadillac made a loss on each one, but money wasn't everything: the models firmly established Cadillac at the top of the luxury car market.

The car's V12 engine displaced over 6000cc and developed in the region of 135hp at 3,400rpm and is a thing of beauty: the engine bay was styled by Harvey Earl's Art and Color Section. It was even designed to be quiet: hydraulic valve silencers dampened the noise from its overhead valve system by using oil pressure to automatically reset valve lash at zero. Previously, this had been a problem requiring frequent adjustment to prevent clacking. Creating prodigious torque, the V12 was mated to a three-speed manual gearbox that carried synchromesh on its upper two ratios. Ride comfort was also paramount: leaf springs and a three-quarter floating back axle housing a spiral bevel differential provided a dominant ride while fifteen-inch vacuum servo-assisted drum brakes stopped the massive car well for its day. Inside and out the cars, offered in a range of body styles from Fisher and Fleetwood, were opulent and very well equipped.

This Cadillac 370-A V12 from the Ian Grange Collection is understood to wear two-door Sports Roadster coachwork by Fleetwood (body style 4702) albeit that its engine began life aboard a Five-Passenger Sedan. Reputedly acquired by previous owners the Valencia Collection from RM Auctions, it was subsequently treated to a very extensive and photographically documented in-house restoration. The car has a range of the most desirable options: a well-trimmed dickey seat, 'depress beam' headlamps and swivelling spot lamps that turn with the wheels complement a windscreen pillar-mounted rotating spotlight. The louvered bonnet, hood with side screens and optional wire-wheels (with dual side-mounted spares) finish the wonderfully evocative exterior, and there is even a golf club locker for those who partake. Although the MOT expired in 2016, the car runs and drives.

A little bit about the late Ian Grange:

Not the tallest man in the world, Ian Grange was nonetheless a very much larger than life character. Born in Stockport, severe dyslexia saw him leave school at fifteen with no qualifications. After doing his National Service, Ian went into the Manchester motor trade. A school of hard knocks that could literally have the shirt off your back (as he found out when purchasing a Jaguar E-Type from Harold O'Connor), the budding entrepreneur learnt to wheel and deal with the best of them setting-up Red Lion Autos in Cheadle before specialising in classic cars and relocating to Chorlton.

A serial nightclub owner as well as a car dealer whose clientele included 'everyone from dustbinmen to lords', Ian traded on both sides of the Atlantic Ocean. Resident in Florida for several years, he could turn a profit on machinery that made more conservative rivals blanch! Never afraid to sit on his stock 'while it increased in value', he professed there was 'a bum for every seat' and sold a fabulous array of classics including a Mercedes-Benz SSK, Lamborghini Miura, Ferrari 275 GTB, AC 428 Convertible, countless coachbuilt Rolls-Royces and Bentleys not to mention numerous outlandish American cars.

A classic car dealer for almost sixty years, Ian was a familiar face at auctions up and down the country. Happy to be bound by one of his irrevocable handshakes and a stickler for punctuality, he remained active up until his death last year. Thankfully, his daughter Samantha Grange-Bailey is picking up where her father left off and will reinvest the proceeds of the collection in further stock.
Share: