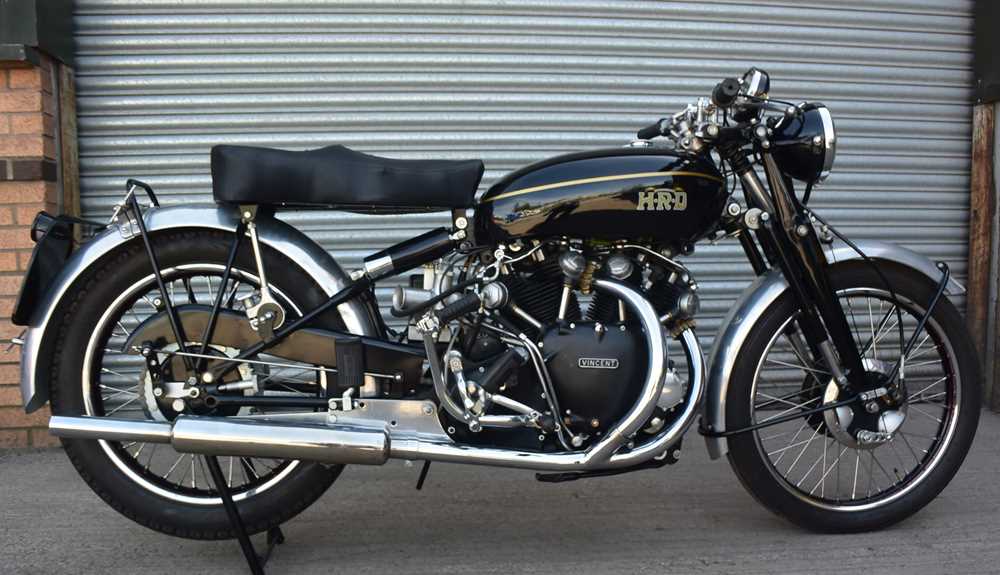 The Vincent story began with Phil Vincents purchase of the HRD name in 1928, initially producing bikes using proprietary engines in his own chassis. Always the innovator by the mid-30s he had developed his own 500cc single and 1000cc twin-cylinder designs that survived until the companies closure in 1955. The big vee twin was the fastest motorcycle in the world at the time and with some astute marketing become the bike everyone aspired to own. The Rapide and Black Shadow range have become some of the most desirable and iconic bikes of the era.

This 1950 Rapide was subject to a partial restoration about 9 years ago and has since been displayed in the vendor's lounge. The wheels were rebuilt, the seat recovered and most of the paintwork and plating refinished. A new wiring harness was bought but has yet to be fitted. Running before the restoration the engine was left untouched with just the outer surfaces being cleaned up so the bike will need a good recommissioning and some finishing work before use. It comes fitted with a BTH magneto, Black Shadow front brake drums, Lightning vented front brake plates and the large diameter 150 MPH speedo. According to research carried out online engine number F10AB/1/5941 left the factory in February 1951 whilst the upper frame member R/1/4714 was initially fitted to a Comet in November 1949. Unfortunately, we have not been able to shed any light on the bike's history but it appears to have had this combination of numbers since the 1960s.