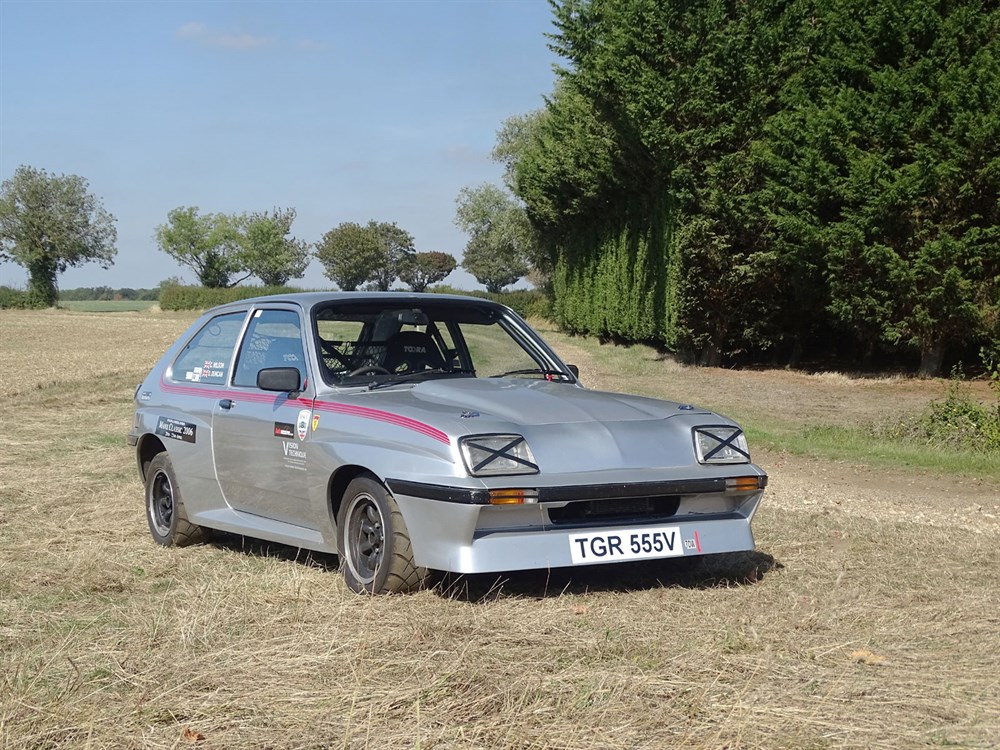 - Current ownership since 1986 and believed to have covered just 40,500 miles from new

- Fitted with a 2.6 Litre 'Group 5' engine built for the vendor by Gerry Johnstone (Blydenstein's right-hand man and DTV's former manager)

- The fastest Tarmac Rally Car of its generation

`The success, and the refinement, of the HS and HSR models is almost entirely to the credit of Bill Blydenstein, Gerry Johnstone and the mechanics at the Blydenstein business at Shepreth, and little to do with the factory's own efforts' (Graham Robson, Vauxhall Chevette HS and HSR)

Introduced in 1975, the Vauxhall Chevette was part of parent company GM's `T-car' programme. The newcomer proved a sales success but having attended that year's RAC Rally incoming Vauxhall chairman Bob Price decided that a halo model along the lines of Ford's high-profile Escort RS machines would enhance its showroom appeal still further. To this end he approached Bill Blydenstein who was already running the Dealer Team Vauxhall race programme with a brief to transform the Chevette into a rally car. Never one to shirk a challenge, Blydenstein made good use of the GM parts bin. Following the established small car / big engine formula, the resultant Chevette HS was powered by a 2.3 litre 16-valve `slant four' allied to five-speed Getrag transmission. Riding on Chevrolet Vega alloy wheels and equipped with beefier Opel Kadett C GT/E suspension and rear axle, it proved fast, chuckable and raucous in equal measure. Some 400 examples had to be made to achieve Group 4 homologation and thanks to Blydenstein's ability to squeeze a quart into a pint pot, Vauxhall attracted the driving talents of Pentti Airikkala, Jimmy McRace, Russell Brookes and Tony Pond. A match for the Ford Escort RS1800 on tarmac in HS guise, the Chevette became its superior when it evolved into the HSR. Nicknamed `Plastic Fantastic', the latter employed fibreglass for its front air dam, bonnet, rear spoiler, tailgate, and front / rear wings. Lighter and more aerodynamic than its predecessor, the HSR also boasted a greater range of transmission and rear axle options. Better able to deploy its considerable power and torque thanks to improved five-link rear suspension and wider wheels, Vauxhall's diminutive hatchback continued to embarrass rivals on tarmac well into the Group B era. The HS won the British Open Rally Championship for Drivers in 1979, while the HSR claimed the manufacturers' crown two years later. Vauxhall were supposed to build 50 HSR cars but Blydenstein's Shepreth-based outfit only managed to complete 34. The merger between Dealer Team Vauxhall and Dealer Opel Team saw the newly formed GM Dealer Sport switch its attention to the Opel Manta 400 which was a pity because Blydenstein was working on a 2.6 litre HSR which he felt could have changed the face of rallying!

Authenticated by the Droop Snoot Group as a Vauxhall Chevette HSR, `TGR 555V' was supplied new to David Sayer of Sayers Haulage via Sherwoods Ltd of Darlington. Whether Mr Sayer campaigned the car or not is unknown. However, the HSR was nonetheless fettled by Mike Taylor Developments Ltd of Northallerton in March 1980; a firm famous for their rally preparation skills. Restricted to tarmac competition usage only since entering the current ownership during 1986, the Vauxhall is understood to retain its original, Shepreth-modified bodyshell and GRP addenda. Assembled by none other than Gerry Johnstone, the current 2.6 litre `Group 5' engine houses an Allen crankshaft, Allen conrods and Cosworth pistons. Mated to five-speed Getrag transmission, it transmits power to the `five-link' rear end complete with Limited Slip Differential. Enjoyed by the vendor on a wide variety of sprints, hillclimbs and circuit events, `TGR 555V' has also contested the Tour Britannica and Manx Classic. Last driven in anger by Martin Greaves of Classic Performance Engineering during the Vintage Sports Car Club's 2016 Pomeroy Trophy, the HSR started readily upon inspection and behaved well during our recent photography session. A biddable hooligan in the vendor's hands, the Vauxhall has obvious potential when it comes to the various racing series for 1970s machinery not to mention several prestigious European events. More original than many a hard-used rally car, `TGR 555V' is offered for sale with V5C Registration Document, original maintenance programme / service booklet, Vauxhall Chevette 2300 HS Supplement, 1986 bill of sale, Droop Snoot Group certification, sundry paperwork and spares package (front subframe, gearbox, rear axle and wheels etc).
Share: