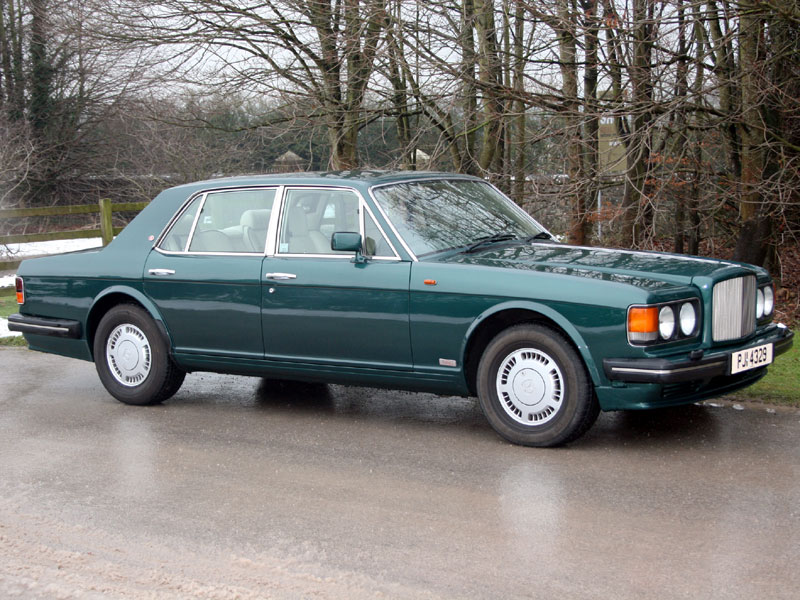 Introduced at the 1982 Geneva Motor Show, the Mulsanne Turbo signalled a revival in the fortunes of the winged B. Somewhat raffish when compared to its Rolls-Royce Silver Spirit sibling, the Turbo breathed new life into Bentley sales. Indeed in some ways, this glorious automotive wolf in (large) sheep's clothing can be credited with inspiring Bentley's victorious return to Le Mans. With some 300bhp courtesy of its force fed 6.75 litre V8, the Mulsanne Turbo was reputedly capable of an easy 135mph and 0-60mph in under seven seconds. Although, for those not wishing to indulge in such prodigious performance, its smooth automatic transmission and supple independent suspension also allowed for more dignified progress. Debuting in 1985, the evolutionary Turbo R variant provided an altogether more focused driving experience. Benefiting from an uprated torque converter, stiffer anti-roll bars and firmer damping, its handling drew considerable praise from the contemporary motoring press. Trimmed with the same skill and attention to detail as any other Crewe-built car, the sports saloon's cabin was adorned with thick leather hides, rich wood veneers, polished chrome fittings and plush carpets. Upgraded with Bosch Motronic fuel injection and ABS brakes during 1986, the Turbo R was further reworked for the 1989-model year, gaining quad headlamps and an increased 145mph top speed.

Finished in Brooklands Green with green-piped parchment leather upholstery, this particular example is variously described by the vendor as being in "good" (bodywork), "very good" (interior trim), "good" (paintwork) or "very good" (engine, automatic transmission, electrical equipment) condition. Stated to have covered just 73,000 miles from new, the Bentley is further understood to have been main dealer serviced up to 56,000 miles and specialist maintained thereafter. Riding on correct-type alloy wheels shod with fresh Avon tyres, 'PJI 4329' is said to "drive very well indeed". Boasting "special order boxwood veneer inlays" to its interior, this imposing Turbo R is offered for sale with "all tools and books" plus a MOT certificate valid until May 2011.
Share: