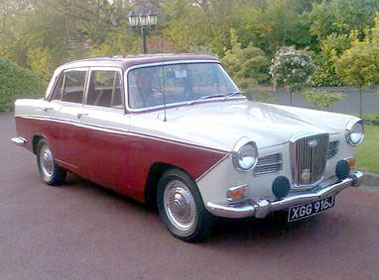 Updated alongside the rest of its Farina-styled BMC B-Series stablemates, the Wolseley 15/60 metamorphosed into the 16/60 for 1961. Able to boast a lengthened wheelbase, widened track and stiffened suspension, the newcomer was not only more spacious but also handled better than its predecessor. Performance was increased too thanks to the adoption of a larger 1622cc OHV four-cylinder engine developing some 61bhp and 91lbft which could be allied to either four-speed manual or Borg Warner automatic transmission. Sporting smaller tail fins, revised rear light clusters, chrome side strakes and repositioned bumper over riders, the 16/60 looked suitably modern. Though, the proud radiator grille complete with traditional illuminating light left onlookers in no doubt as to its marque identity. Very much at the top of the B-series Farina model tree, the Wolseley featured a suitably upmarket wood and leather interior. Remaining in production until 1971, the 16/60 is thought to have accounted for some 63,082 sales.

Finished in maroon over cream with red leather upholstery, this particular example is described by the vendor as being in "good" condition with regard to its engine, automatic transmission, interior trim and bodywork. Though, he notes that (a) the otherwise "good" paintwork has "three or four blisters" and (b) the front foglights are inoperative. Reportedly "in restored order" by the time it entered the current (sixth) ownership on 22nd June 2005, the past four years are understood to have seen the Wolseley add just over 1,000 miles to its odometer reading which currently stands at an unwarranted 69,500. Said to have been "garaged and serviced for MOTs" during that time, this elegant saloon is offered for sale with a few old MOTs, sundry restoration photographs, MOT certificate valid until November 2009 and historic class (free) road tax.
Share: