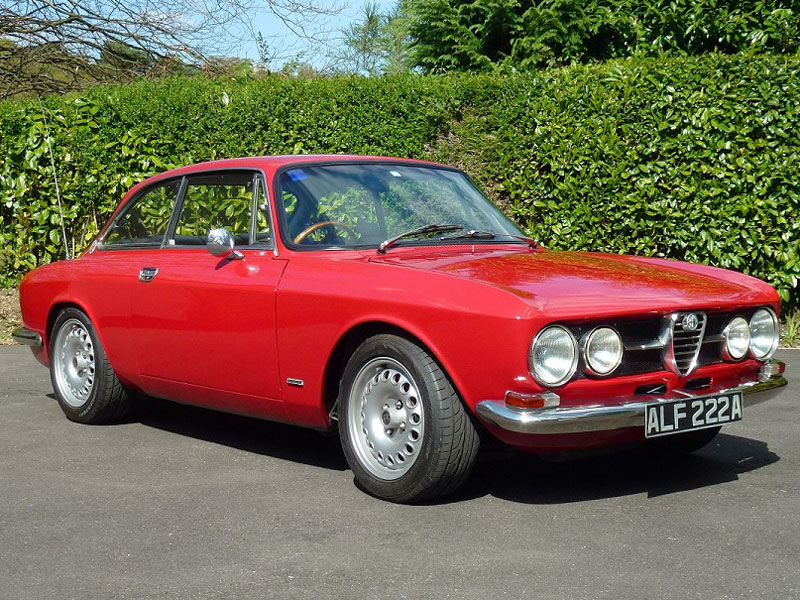 The pretty 105/115 Series two-door Coupes made in various specifications by Alfa Romeo from 1963 to 1977 were penned by Giorgetto Giugiaro as one of his first projects for Bertone. They succeeded the much vaunted Giulietta Sprint Coupe and were built on a shortened version of the Giulia Berlina floorpan. Power came from Alfa's ubiquitous four-cylinder all-alloy twin-cam engine which, over the years, was available in a range of capacities from 1290cc to 1962cc. The engine was mated to a slick five-speed gearbox. Suspension was by wishbones and coil springs at the front and coil-sprung live axle at the rear. Braking was by discs all round and steering by recirculating ball. The 1750 GTV of 1967 was a notable evolution. Most obvious was the increase in engine capacity to 1779cc which raised the power to 120bhp and torque to 137lbft. The chassis was uprated to cope and sported revised suspension geometry, the addition of a rear anti-roll bar and more powerful disc brakes. The new car also gained two extra headlights, a 30mm wheelbase extension and a host of minor improvements.

This smart righthand drive example was restored in Australia around 2010 before being imported to the UK by the vendor in 2014. Set up with track use in mind when purchased, he set about civilising it for road use which included replacement of the then-fitted 2 litre unit with a 1750 engine by Bianco Auto Developments which we are informed was reconditioned some 1200 miles ago -the invoice on file totalling some £3800. The car further benefits from the fitment of Alfaholics suspension, brakes and replica GTA wheels. Offered with its distinctive registration number, ALF 222A is accompanied by a history file of invoices, Club valuation certificate, MoT to May 2018 and a spare set of keys.
Share: