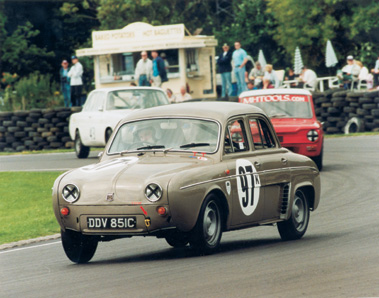 This 1964-built Renault Gordini, first registered in the South West in 1965, has all the 1962-1966 homologated options from the factory Competition Department. When purchased by the vendor from a collection, the right-hand drive sports saloon had been used sparingly on the road for just over 22,000 miles, making it an excellent and individual proposition for historic racing.
With the benefit of excellent power to weight ratio and disc brakes on all four wheels as standard, this Appendix K Group 2 Competition Touring Car has been race-prepared, though with period patina retained, to FIA regs. Campaigned across Europe over the last four years, it won the 2003 HSCC/HRSC Appendix K Class outright against Lotus Cortinas, Ford Mustangs and Falcons, and enabled the owner to win the Driver of the Day Award at the 50th Anniversary Oulton Park Gold Cup Meeting. Other notable events included the 100th Anniversary celebrations at Phoenix Park, Dublin, and the Chimay Historic Endurance Race in Belgium.
Eligible for many European Historic race series including all FIA Appendix K events, Goodwood, HSCC/HRSR Championship and Top Hat Endurance events (Pau, Montlehery, Dijon, Chimay and Spa in 2004), the car also has on file MOTs from the 1990s, list of former keepers, brochures, manual, FIA papers, original homologation forms, roll cage certificate and list of helpful contacts. A spares package, including newly race-prepared crank and flywheel, is also available from the vendor who would be happy to assist the buyer at the first race.
Share: