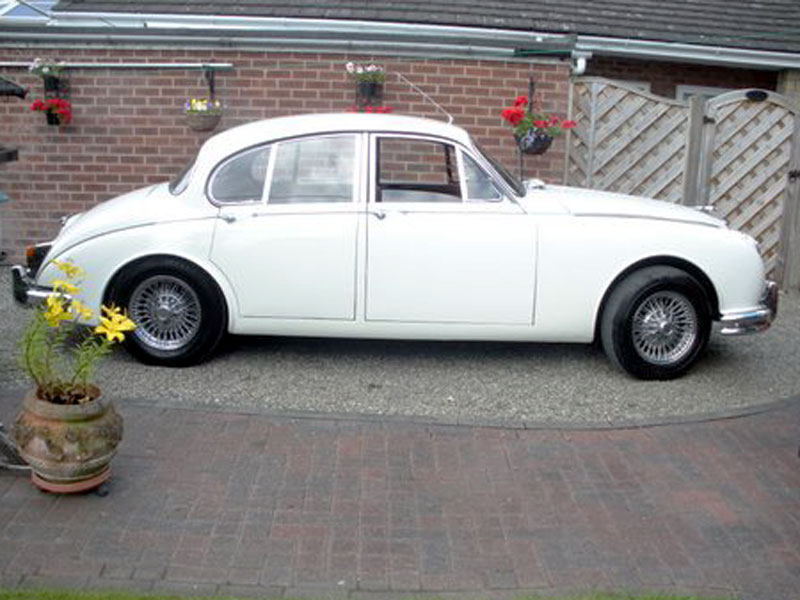 Synonymous with the swinging '60s, the MKII has, at least until very recently, been Jaguar's most widely admired Saloon. Featuring notably slimmer roof pillars than its MKI forebear, the newcomer was as airy on the inside as it was elegant on the outside. Its monocoque bodyshell was equipped with independent coil-sprung front suspension and a well located live rear axle, 12-inch disc brakes all round and recirculating ball steering. The model could be specified with a 2.4, 3.4 or 3.8-litre version of Jaguar's race-proved, DOHC inline, six-cylinder XK engine. The interior was quintessentially British with its sumptuous leather-covered seats, polished wood fascia and door cappings, comprehensive instrumentation and impressive row of auxiliary toggle switches. The attention to detail and build quality of the MKII were remarkable for the price being asked (just £1,779 0s 10d including taxes even for the 3.8) - these cars punched above their weight. Equipped with the 220bhp 3.8-litre engine, the Jaguar was capable of sprinting to 60mph in as little as 8.5 seconds and on to a top speed of 125mph - small wonder that it was the first choice of both bank robbers and the police of the period! It was also extremely popular with the public, outselling its smaller-engined siblings, with 30,141 being produced between 1959 and 1967. Even so, at this point the 3.8-litre engine option was dropped from the range and the remaining models renamed 240 and 340 respectively. You can't keep a good design down, however, and echoes of the car's unforgettably graceful curves provided the inspiration for both the S-Type of the '90s and the X-Type of the '00s.

The example offered is a home market 3.8-engined MKII equipped with the optional three-speed automatic transmission. It sports White coachwork and a Red leather interior. '306 YKJ' was apparently restored in 1990, at which time it was fitted with a reconditioned engine. The vendor currently regards the bodywork, paintwork, interior trim and engine as "good" but notes that the automatic gearbox "requires some adjustment to its kickdown mechanism". Said to be a five-owner car, the Jaguar comes complete with lots of history, old MOTs, details of the restoration etc and is taxed and MOT'd into May 2012.

PLEASE NOTE: Since the catalogue went to press we have been informed by the vendor that he has had this lot's automatic transmission attended to (the fault turned out to be fluid level related). He has also treated the car to a new condenser, points and plugs not to mention a replacement water pump.
Share: