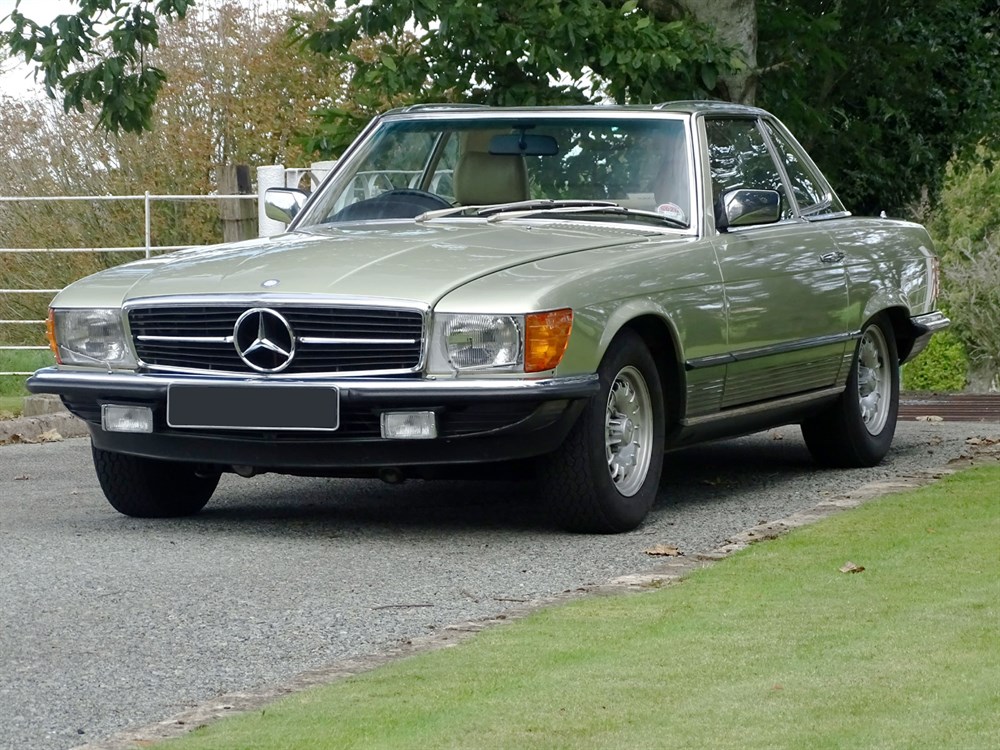 - Current family ownership since 1995 then 1 owner from new and been constantly MOT tested.


The landmark 300SL was unveiled in 1954 and the similarly styled, but mechanically unrelated 190 followed in 1955, completing the first generation of cars. The second series of SLs began with the 230 of 1963. It was distinguished by its lower waistline, big curved screens and the distinctive optional hardtop that earned the model its nickname of 'pagoda top'. The larger, third generation model (R107) was launched in 1971, initially with just a 3.5-litre engine (350 SL) mated to a four-speed automatic transmission. The car featured a two-door monocoque bodyshell with independent suspension all round - double wishbones/coil springs at the front and semi-trailing arms/coil springs at the rear. Braking was by discs all round - ventilated on the front. Over its phenomenal 18 year reign, the R107 range was powered by no less than eight different engines. The V8-powered 500 SL variant was manufactured from 1980 to 1989, and with 240bhp on tap was a genuine 135mph car, with ample reserves of effortless acceleration.

The notably handsome and very original SL 500 being sold is a UK specification example that's finished in the eye-catching combination Dark Metallic Green Hardtop over Light Metallic Green bodywork, all of which is teamed with Beigy-Green Mercedes-Benz Tex interior trim, colour-keyed throws for the seats and Brown over-mats. This time warp Benz has covered just 18,666 warranted miles from new (just 2000 of which has been accrued in the last 13 years), and is exceptionally tidy inside and out as a result. The first keeper retained the car to 1995, since when it has remained within one family - the spare wheel remains unused and the Mercedes has been MOT'd every year. Examples of these fine cars don't come much better than this one, which comes complete with soft top, cruise control, full toolkit and an MOT valid into June 2020.
Share: