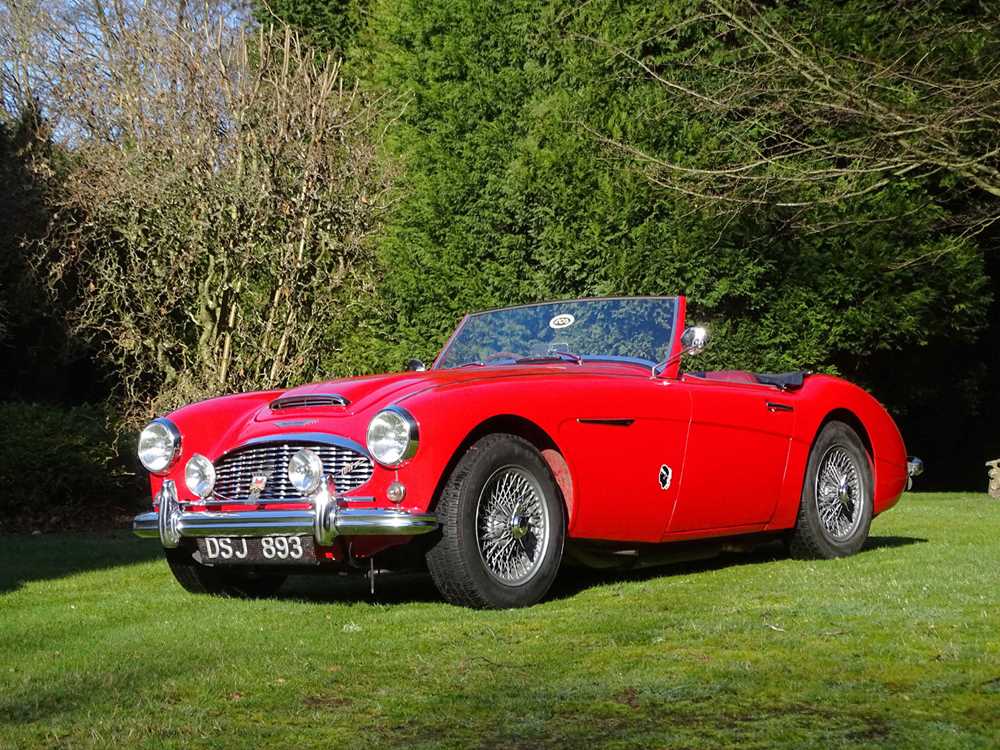 If cars could talk then ‘DSJ 893’ would be giving lecture tours! Inspired by his history teacher father, the vendor has always had a love of travel and adventure. Indeed, circumnavigating the globe has allowed him to build a highly successful furniture business. His four-wheeled companion for over twenty years, this Big Healey began life as a US export model 100/6 complete with high ratio back axle to compensate for its lack of overdrive. Repatriated by the seller as the basis for an endurance rally car in 1999, it was subject to a ‘chassis up’ restoration including conversion to right-hand drive. Last overhauled circa 30,000 miles ago, the engine is a 2912cc (‘3000’) straight-six with Stage 2 cylinder head, balanced crankshaft, crankshaft damper, Piper camshaft, enlarged aluminium sump, high capacity oil pump, oil cooler, aluminium expansion tank, alternator, computerised fuel pump, bespoke big bore exhaust and 1-2-3 electronic ignition etc. Sourced from Denis Welch, the Tulip close-ratio, four-speed, centre change manual gearbox is allied to a high ratio differential (approximately 3.7:1) and boasts overdrive. The suspension has been uprated all round with competition rear leaf springs and a 1-inch front anti-roll bar. Front disc brakes aid stopping power and the car rides on stronger and wider 72-spoke 5.5J wire wheels. An eighty-litre fuel tank provides welcome extra range. Rebodied in alloy with the exception of its original BN4 ridged bonnet, the Big Healey was last repainted some five years ago and remains highly presentable. Neat touches abound on the car. For instance, the front number plate is made from perforated sheet metal so that airflow to the oil cooler is maximised, while one of the rear bumper brackets carries a flagpole mount should the crew wish to fly a Union Jack in foreign climes! The Black hood is complemented by a White ‘Works’ hardtop and the non-standard front seats are decidedly comfortable and supportive.

The Corsican ‘La Testa di Moru’ (Moor’s Head) emblems adorning the flanks and the Automovil Club Argentino sticker affixed to the windscreen hint at some of the 2+2-seater’s past excursions. However, there can be few cars of any age that have ventured as far afield as ‘DSJ 893’. Visiting some twenty-six countries in total, it has completed over 200 Alpine passes with a broken spoke on the first of several Stelvio runs prompting the upgrade from 60- to 72-spoke wheels. Driven across the Golden Gate Bridge, Bonneville Salt Flats and Death Valley, it has also been to the Atacama Desert, Iguaza Falls and Ushuaia. Various of its escapades have been chronicled in the Austin Healey Club’s magazine ‘RevCounter’ with the much enhanced BN4 also completing a dozen or so ‘Chase The Haggis Tours’ around Scotland and being used to commute to the vendor’s French holiday home. Regularly serviced and ‘kept on the button’, the last major work undertaken was a full rewire in 2019. Starting readily upon inspection, ‘DSJ 893’ felt notably well sorted during a very brief test run. Offered for sale at a fraction of its build, development and maintenance cost, this wonderful Big Healey is accompanied by a V5C Registration Document, CD-R from Barkston Refinishing re one its bodywork refurbishments and history file.