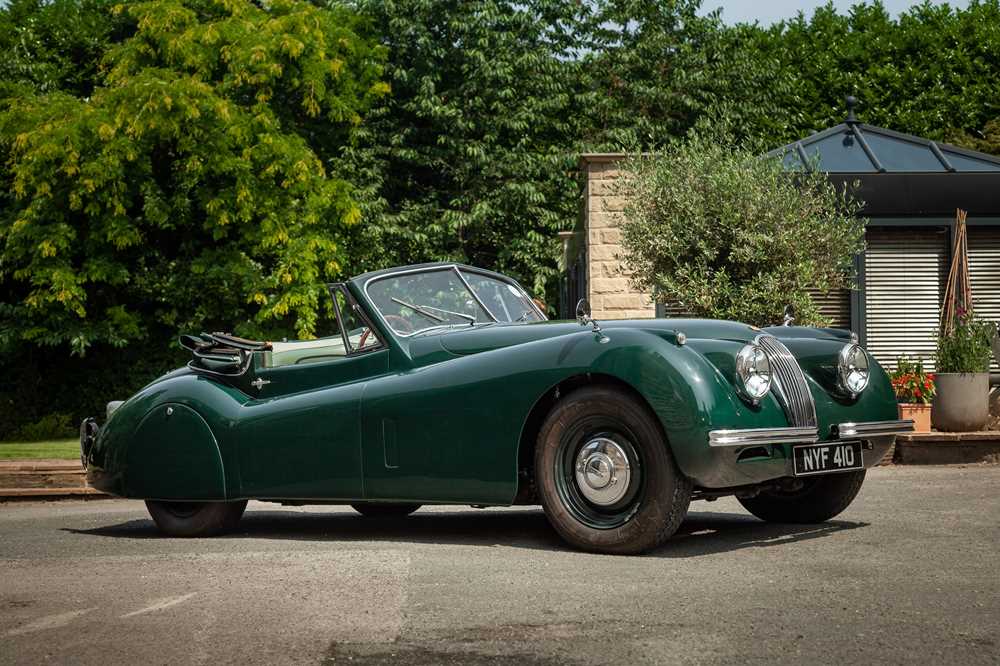 The thirtieth of just 295 right-hand drive Jaguar XK120 Drophead Coupes made, chassis 667030 was completed on 29th September 1953 and supplied new the following month by Henlys Ltd of London to Lt Col S.E. Sanders of Gainsborough, Lincolnshire. Road registered as ‘NYF 410’, the two-seater was reputedly taken off the road in the late 1960s. Belonging to a Norfolk farmer by 1980, he got as far as refurbishing the chassis before a divorce saw the still immobile Jaguar sold to Paul Watkins of Milton Keynes in 1984. A commercial airline pilot, Mr. Watkins disassembled the Drophead Coupe but did little else to it. Acquired by renowned marque enthusiast Chris Jacques during 1999, chassis 6670303 joined a stable which included one of the famous XK120 Lightweight competition cars but again aside from a steering box rejuvenation little was done to it.

Progress finally came when the two-seater was sold via Retro Classics Ltd of London to the chairman of the Cape Jaguar Club in South Africa, Jonathan Mayne in October 2003. Mr Mayne entrusted the Drophead Coupe to Jaguar Classic Restorations (Cape) where it was treated to an exhaustive, near ‘nut and bolt’ rejuvenation which took over four years to complete. The original engine was overhauled as were the gearbox, brakes and suspension. The chassis and body were refurbished by Fine Blast of Philippi and the cockpit re-trimmed by FS Interiors using Suede Green Connolly leather sourced from the UK Hide Company plus a Suffolk & Turley supplied mohair hood. The interior woodwork was renewed and British Racing Green paint was chosen to adorn the exterior. Aside from the addition of an electric cooling fan, the car was returned to factory specification almost throughout.

Further improved by SG Classic Cars of Chempet in 2013 including the fitment of Vredstein radial tyres all round and sundry detailing, the XK120 was repatriated to the UK five years later. Joining the vendor’s private collection in April 2019, that same month saw ‘NYF 410’ uprated with a wood-rimmed Moto-Lita steering wheel and seatbelts by Cotswold Classic Car Restorations at a cost of £2,149.20. Further benefiting from a minor brake overhaul at the hands of Miles Classic Ltd during June 2019, the Drophead Coupe has only covered some 1,200 post-refurbishment miles. Considered by the seller to be in ‘very good’ (paintwork, electrical equipment, interior trim) or ‘excellent’ (engine, gearbox, bodywork) condition, this decidedly handsome XK120 is offered for sale Jaguar Heritage Certificate, V5C Registration Document and detailed restoration/parts invoices.

Famously built as a mere showcase for Jaguar's all-new 3442cc DOHC XK straight-six engine, the XK120 Roadster caused a sensation when it was unveiled at the 1948 London Motor Show. Utilizing a shortened MKVII chassis complete with independent front suspension, a ‘live’ rear axle and hydraulic drum brakes, the lithe two-seater possessed class-leading performance and road holding. Such dynamic excellence was rewarded with numerous victories including the 1950 RAC TT and 1951 Liege-Rome-Liege Rally. Arguably, the defining sportscar of its generation, a perilously shaky post-WW2 British economy gave the Coventry manufacturer little choice but to concentrate on overseas sales. Introduced in April 1953, the Drophead Coupe was not only the last but also the rarest XK120 derivative. Offering significantly better weather protection than its roadster sibling, the newcomer featured a fully lined hood with an integral frame and wind-up windows. An elegant-looking machine regardless of whether its soft-top was up or down, the two-seater boasted a rich wood veneer dashboard and matching door cappings. Only in production between April 1953 and August 1954, just 295 of the 1,765 XK120 Drophead Coupes which rolled off the Browns Lane assembly line were to right-hand drive specification.