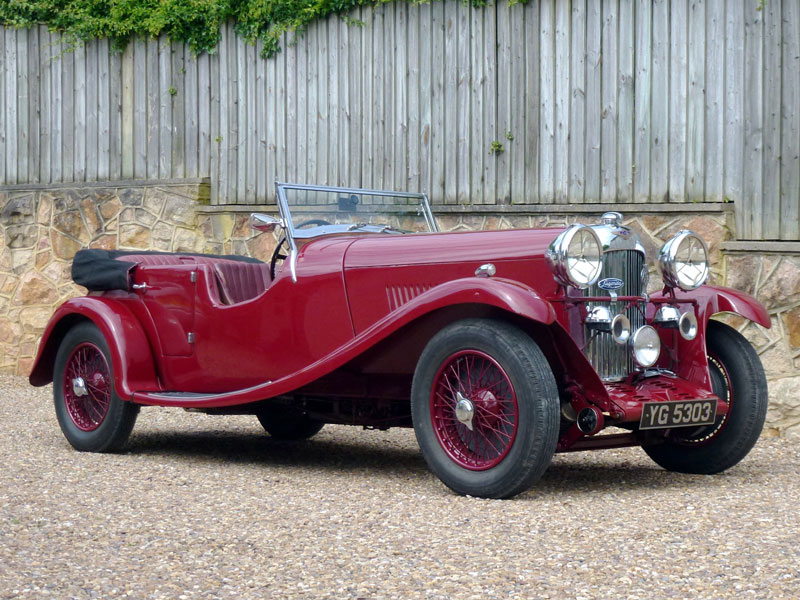 Designated a 1934 model, chassis S10516 was initially road registered as `YG 5303' by West Yorkshire County Council on November 30th 1933. Recent correspondence with The Lagonda Club's Honourable Registrar Arnold Davey has revealed the following: "I confirm that the 16/80 had a T7 Tourer body from new and the engine number also looks to be original when studying cars of a similar age. We have no pre-WW2 ownership information but chassis S10516 was first entered into our records on 26th April 1955, when it was owned by R.A. Marshall of Sarmesfield Garage, Weobley, Herefordshire". Thereafter, accompanying continuation logbooks reveal that `YG 5303' belonged to Jack Stewart of Eaton Hall, Leominster, A.L. Playford of Tarrington, Alexander Ainscough of Kymin, Alan Periam of Rogerstone, David Malcolm McAlpine (of the construction dynasty), Alastair Hume of London EC4 and Wilfred Richards of Much Hadham before entering the current ownership during August 1975. The mainstay of a private collection for the last thirty-eight years, the Lagonda has had quite some care and attention lavished on it. As well as being re-trimmed by David Royle using Maroon leather upholstery, the four-seater has benefited from a new petrol tank, radiator, water pump, hood / hood bag / tonneau and rubber bump stops not to mention re-lined brakes, re-furbished wheels (with new rims) and new shock absorbers made to the original Lagonda pattern. While, more recent work has seen the 16/80 treated to a bare metal respray and thorough overhaul of its 2-litre straight-six engine by John Wood of Classic Racecraft (the latter carried out within the last 5,000 miles or so). Starting readily upon inspection and running well, `YG 5303' has proved reliable on numerous Continental sorties. An elegant and usable Post Vintage Thoroughbred, it is anticipated that this handsome Lagonda will be driven some eighty miles to the sale.
Share: