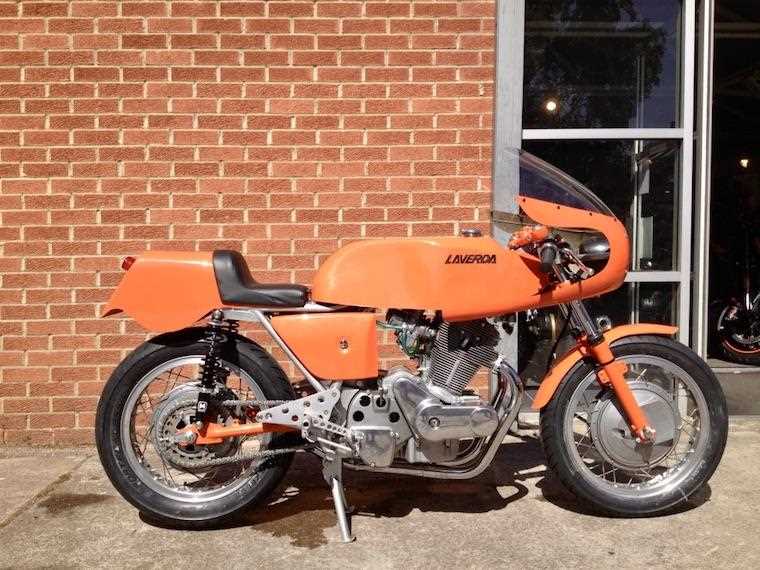 The roots of the Laverda Motorcycle company go back to 1873 when Pietro Laverda began producing agricultural equipment in Breganza in North-East Italy. Like many other Italian firms, they diversified into motorcycles after the second world war manufacturing good quality and for the time relatively innovative bikes. By the 1960s they had progressed onto bigger capacity engines launching the 750GT in 1969 and the limited edition SFC production racer in 1971. Only about 530 SFCs were ever made and the model was featured in the Guggenheim Museum in New York's 1999 exhibit The Art of the Motorcycle as one of the most iconic bikes of the 1970s.

This SFC Evocation started life as a standard 750 SF1 in 1973, being converted to SFC spec in 2017. The engine work was carried out by Keith Nairn, a recognised Laverda specialist who fitted new barrels and pistons, valves and guides, starter motor, alternator, timing chain, drive chain and bell mouth carbs. The chassis was modified with Maxton suspension, Laverda Paradis 2 into 1 exhaust and a carbon fibre fairing, tank and seat unit finished in classic Laverda orange race colours. The bike was paraded by the vendor at the Spa Classic in 2017.