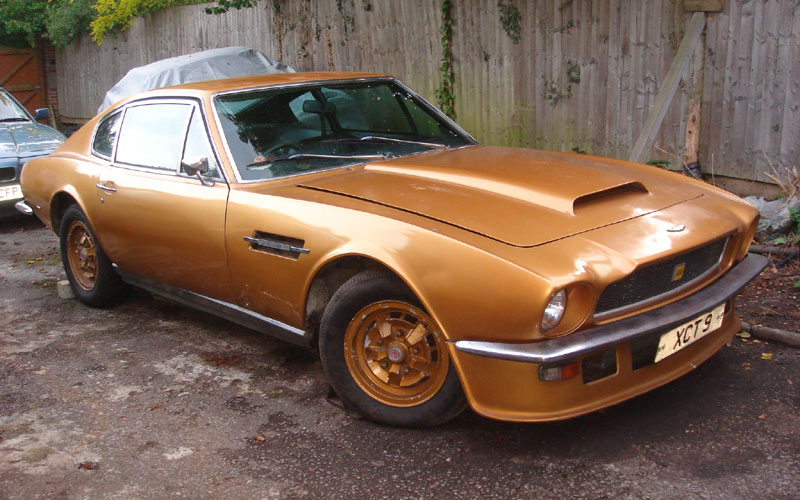 - In the current ownership since 1987

Offered for restoration, this historically important AMV8 started life as Newport Pagnell's Works Development Car for the carburettor-fed Series 3. Presented to the press at Hexagon Motors in September 1973, the four-seater had been registered four months earlier and driven around the UK by Roger Stowers "for a very large part of its preparatory pre-test mileage" as a letter on file confirms. The vendor contends that chassis V8/11006/RCA must originally have been a Series 2 which was extensively re-engineered. Contemporary road test photographs do not show the Vantage Deep Front Spoiler currently fitted. However, the V8 may well have been involved in the development of later models (including the Vantage) because it was not released from factory service until September 1976. Boasting manual transmission, this well-known Aston was found capable of 0-60mph in 5.6 seconds and 162mph when road tested by 'Autosport' (29/11/1973) with 'Motor' and 'Classic Car' achieving similarly impressive figures.

Entering the current ownership during May 1987, chassis V8/11006/RCA has not run since being placed into storage some five months later. The 92,888 shown on its odometer are believed to represent the total covered from new due to the accompanying provenance which comprises: old MOTs, service bills and correspondence from AML / AMOC / DVLA and previous custodians. The car has had few owners with only four previous keepers (one sold and bought it back again!). The vendor states that the front discs were 'recent' when he acquired the car and should clean up well. The Langford Stainless Steel exhaust system 'should be fine' and the registration number could 'realise £3,000 towards restoration costs'. He recalls telephoning the DVLA many years ago who advised that it should be possible to reclaim the car's original registration, 'UKX 50L'. Offered with a Swansea V5 document and period road test magazines, this historic Aston will make a very rewarding project.
Share: