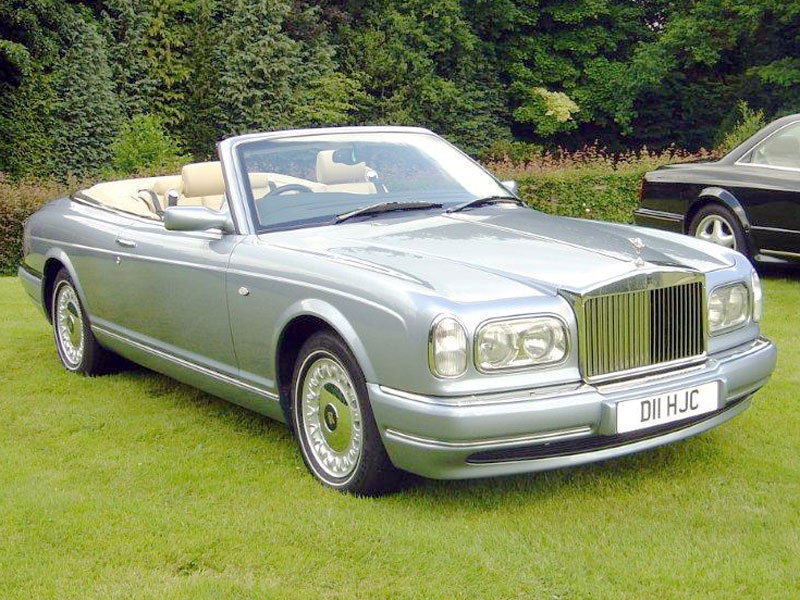 Rolls-Royce registered the Corniche name in the 1930s and apparently assigned it to a prototype based on the Bentley MK V, but the model was never progressed due to the onset of World War Two. The moniker was finally first employed in 1971 on the Coupe and Convertible versions of the Silver Shadow.

Power was provided by the company's long-standing 6.75-litre V8, whose origins dated back to the 1950s. This was mated to a GM Turbo Hydramatic 400 three-speed automatic transmission. Suspension was independent by coil springs all round, augmented by a Citroen-originated hydraulic self-levelling system. Braking was by discs, with ventilated units being phased in for 1972.

The changes that brought about the Corniche II and III were relatively minor. More fundamental updates came with the Series IV of 1993, however - not least the replacement of the plastic rear window with a glass item, while the rest of the roof mechanism was uprated at the same time. Of particular note, though, is that this was the year Corniche production first moved to the Bentley factory at Crewe, following the closure of Mulliner Park Ward.

So to the Series V Corniche that made its debut in January 2000. At the time of its release, it was said to be the most expensive vehicle offered by Rolls-Royce, with a base price of $359,000. With its body mounted on the platform of the Bentley Azure (hence the wheelbase of 3,061 mm) and the front and rear styling drawn from the Rolls-Royce Silver Seraph, it was clearly intended to herald the dawn of a new era for both the model and the company.

It is perhaps surprising therefore that underneath this dashing newcomer lay, not the contemporary 5379cc BMW V12 of the car's four-door sibling, but the latest generation of the same OHV 6.75-litre V8 that had powered all previous Corniche-badged cars. The big plus was, however, self-evident - the engine's massive torque of 738 Nm from as low in the rev range as 2,100 rpm, that positively dwarfed the 490 Nm produced by the German unit. It goes without saying that the car's level of luxury was also extraordinary, with the interior designed to cosset up to four occupants in optimum comfort as they glided though the sun to their next social engagement.

The right-hand drive Corniche being sold is a Series V car from 2001. It has pale blue coachwork, while the interior is trimmed in parchment-coloured leather. There have been two owners to date, the first of whom kept the car in Monaco and used it for commuting to his boat. The vendor purchased it in July 2008 when the odometer was reading 14,000 miles (the same instrument presently shows some 19,900 miles). He has reserved it for use on touring events during his tenure. In his words, "We have had no problems with the car, which is admired everywhere we go." He describes the coachwork, paintwork and interior trim as "excellent", while the engine, automatic transmission and electrical equipment are deemed to be "nigh-on as new".

Records show that just 374 of these 21st century Corniche's were produced in the end, as 2001 was the year that Bentley and Rolls-Royce became two separate companies once again. 'D11 HJC' therefore provides a rare opportunity to purchase a fine example of the last model to be developed by the famous Crewe factory.
Share: