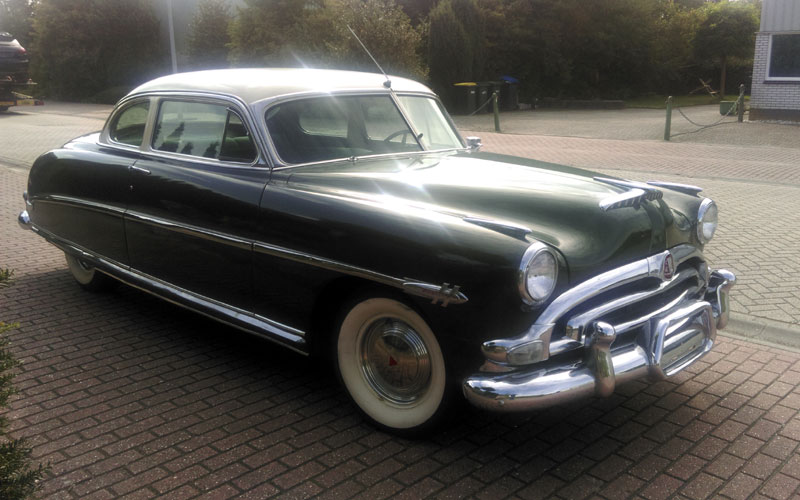 - Believed but not warranted to have covered less than 40,000 miles

Hudson's low-slung Hornet model was produced between 1951 and 1954, and from 1952 onwards featured the previously optional `Twin H-Power' engine as standard - essentially a 308ci (5.0-litre) straight-six unit with a twin carburettor induction system incorporating notably large orange-cased filters. The output ex-factory was 170bhp, however, the unit was capable of far higher figures in the hands of such Works-supported stock car drivers as Marshall Teague, Herb Thomas and Tim Flock. Hudson was the first manufacturer to get truly involved in this branch of motorsport and completely dominated the scene throughout the early `50s. Teague finished the 1952 AAA season with a 1,000-point lead over his nearest rival, winning 12 out of the scheduled 13 events in his `Fabulous Hudson Hornet'. In total, Hudsons won 27 of the 34 NASCAR Grand National races in 1952, 22 of 37 in 1953 and 17 of 34 in 1954 - quite a record for a road car with genuine luxury credentials!

Finished in Cream over Dark Metallic Green with Green / Grey cloth upholstery, this stylish Hornet Club Coupe is reportedly equipped with a special order `7X' engine that allies a 232 cylinder head and uprated exhaust headers to the aforementioned `Twin H-Power' carburettors. The Hudson is also understood to benefit from a 12-volt alternator conversion, electronic ignition and electric fan, and is thought by the vendor to have travelled less than 40,000 miles from new. He presently rates the meaty engine as `superb', and the two-door bodywork, two-tone paintwork, plush interior trim, and automatic transmission as all being in `very good' order. In summary he volunteers that `the Hornet is in very good overall condition, and runs and drives very nicely'. A pleasing example of a rare breed, the motorsport versions of which were simply unbeatable in their day.
Share this page: