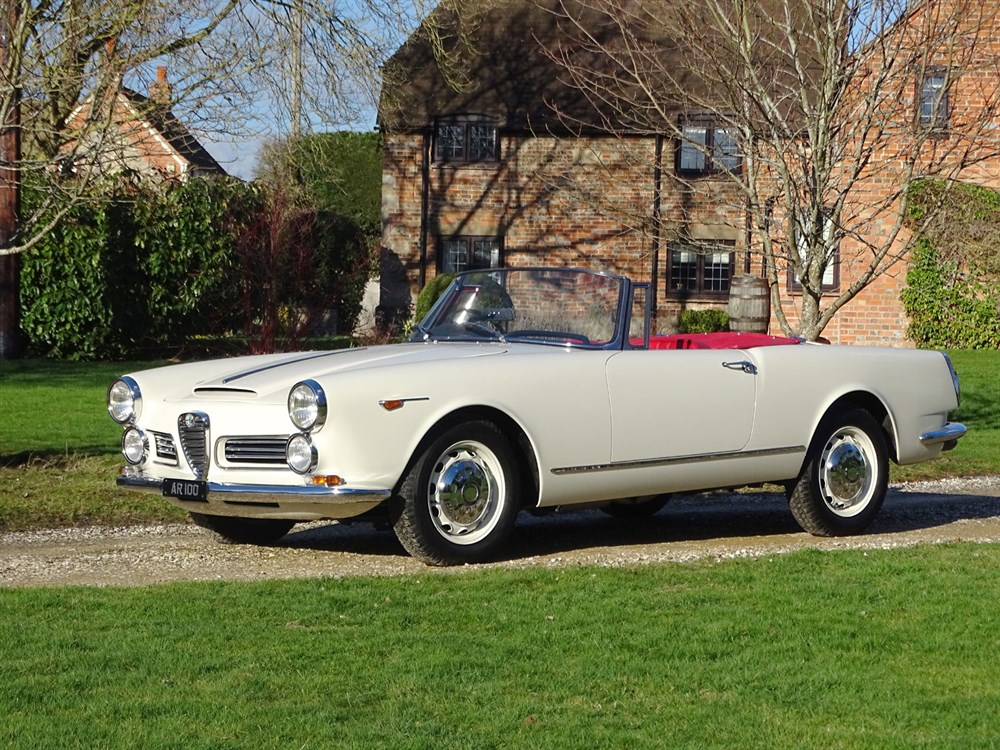 - Purchased new by Reg Thompson of Thompson & Doxey, Southport who was a friend of Juan Manuel Fangio and whose Mercedes-Benz dealership hosted the Mercedes-Benz Formula 1 racing team during the 1955 British Grand Prix

Introduced at the 1962 Geneva Salon, the Alfa Romeo 106-series was available in Berlina, Sprint and Spider guises. Intended as something of a gentleman's express, the newcomer married an evolution of its 102-series predecessor's basic floorpan to a fresh 2584cc DOHC straight-six engine. Designed specifically for the car, this all-alloy unit's imposing architecture harked back to the powerplants of Alfa's illustrious Grand Prix past. Quoted as developing some 145bhp and 156lbft of torque, it drove the rear wheels via a five-speed gearbox and was kept in check by all-round coil-sprung suspension and servo-assisted disc / drum brakes (though, later 2600s were upgraded to rear discs). Designed and built by the legendary Carrozzeria Touring, the Spider variant was unquestionably the best-looking. Despite a reputed top speed of 125mph and spirited acceleration to match, the four-seater soft-top was judged (in keeping with its market aspirations) more of fast tourer than an out and out sports car. Only in production for three years, just 2,255 Spiders are thought to have been made of which a mere 103 were to right-hand drive specification.

Notable as a personal friend of Juan Manuel Fangio having been chosen to host the Mercedes-Benz Formula One Team at his Thompson Doxey Ltd dealership ahead of the 1955 British Grand Prix, Reginald G.B. Thompson Esq. took delivery of chassis AR852057 on 3rd June 1964, collecting the car from Italy himself. Initially road registered as 'CKC 5', the Alfa Romeo also sported the plates 'P6' and 'BKK 178B' before acquiring its current 'AR 100' number decades ago. Briefly relinquishing custodianship of the Spider to some business associates in Kent during 1970, Mr Thompson regained possession the following year. Inherited by his widow Cynthia and passed on to fellow Southport resident Peter Kemp in late 2004, chassis AR852057 has been in the current family ownership since 2005. The vendor, another friend of Thompson's, has known the four-seater all its life and is happy to warrant the current odometer reading of 44,000 miles as representing the total covered from new.

Part of a significant, Ferrari-dominated private collection for the past fourteen years, 'AR 100' was treated to an extensive, 'bare metal' restoration between 2008 and 2010. Much of the work was carried out by Thoroughbred Restorations of England with corresponding photos showing a Ferrari 250GT Lusso, 250GT California Spider and 250GTE 2+2 etc going through the workshops at the same time. Repainted in its original White livery and re-trimmed with Red leather, the Spider also benefited from a thorough mechanical overhaul (engine, gearbox, suspension, brakes, wiring etc) and refinished brightwork. Passing its first post-refurbishment MOT test on 6th August 2010 at 43,766 miles, the Spider has had minimal usage over the last nine years. Entrusted to Italia Speed of Newbury during December 2013, the four-seater gained a new clutch (due to a seized release bearing) and had its triple Solex carburettors rejuvenated.

Most recently fettled by Classic Performance Engineering of Bicester (2017-2018), the Alfa Romeo has had attention paid to its ignition system, heater, brakes, instruments, steering and shock absorbers etc. Starting readily upon inspection and behaving well during our photoshoot, this decidedly handsome, rare right-hand drive, 'matching numbers' 2600 Spider is only being offered for sale due to lack of use. Not dissimilar to an Aston Martin DB4 Convertible in looks or appeal (both droptops boasting Carrozzeria Touring coachwork, straight-six DOHC engines and an enviable marque pedigree), the Alfa Romeo represents conspicuously good value in the current market. Offered for sale with its original green logbook, Alfa Romeo 2600 Instruction Book, Workshop Manual, tool kit (mostly complete), sundry MOT certificates dating back to 1971 (at 31,793 miles), restoration photos and assorted invoices.
Share: