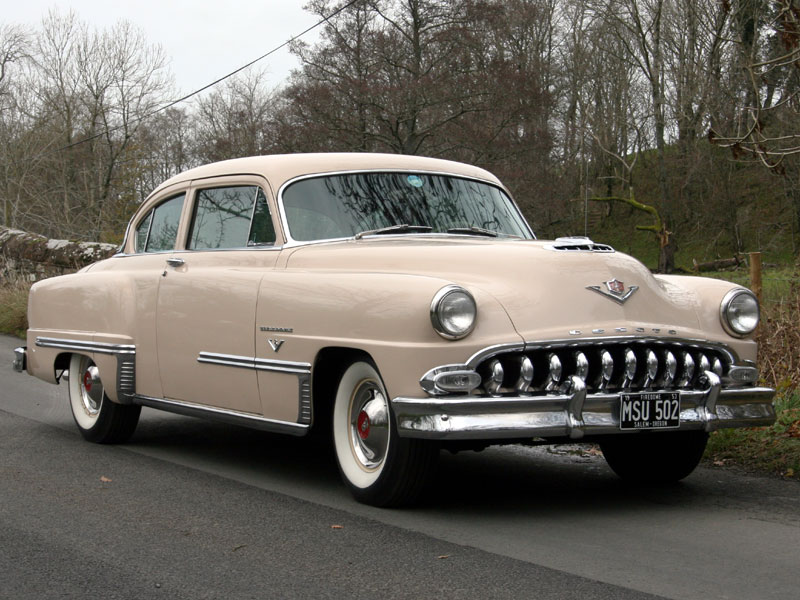 The DeSoto brand was marketed by Chrysler between 1928 and 1961. It was named after the Spanish explorer Hernando de Soto and the products were pitched against the mid-class offerings of General Motors, Studebaker and Willys-Knight. The Firedome model was introduced in 1952 and for 1953 replaced the Custom as the brand's top-of-the-range model. It was available in Saloon, Station Wagon, Convertible and Coupe guises and powered by a 4525cc (276ci) Hemi V8 engine that drove through a four-speed automatic gearbox. The engine's output of 160bhp was sufficient to launch the Firedome to 60mph in 15.5 seconds and on to 100mph. Prices in period started at $2,740 and some 64,211 examples were produced during 1953.

This splendid-looking left-hand drive Firedome is a 1953 Club Coupe that's finished in Arizona Beige and trimmed in Brown Cloth. Since 2010 `MSU 502' has been the property of former paramedic turned writer Ross Pincott, whose guides have helped many a walker enjoy the charms of the Lake District. During this time it has won numerous awards, including two "Car of the Show's", and featured in various magazine articles such as 'Classic American 1989' and 'Cumbria Life 2012'. Evidently beginning life in California in the care of a Southern Pacific railway engineer, who had clocked up 47,000 miles by 1977. It would then seem to have had one more American owner before crossing the Atlantic in 1988. Pincott became the fourth keeper when he acquired the Firedome in 2010 and believes that `Miss Desi' is the only DeSoto of its type in Europe and one of only seven left in existence - the others having all remained in their native USA. He currently regards the car's two-door bodywork, engine and transmission as "excellent" and the paintwork and interior trim as "very good", and is now selling the DeSoto complete with its original sales invoice and literature, handbooks, workshop manual and other paperwork, plus an MOT valid until June next year. A unique opportunity to acquire a rare and exciting item of Americana with a delightful history.
Share: