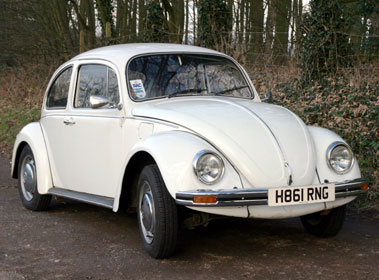 The Beetle, of which more than 21 million were built, needs no introduction - but what is not so well known is that, although Wolfsburg stopped making them in 1978, they continued to be produced until 1996 in Brazil and 2003 in Mexico. Indeed, the Type 2 minibus, or Kombi, is still in production (with a watercooled engine) in Sao Bernardo do Campo, Brazil.

This is a left-hand drive Mexico-assembled car from Puebla, where production started in 1964. Mexican Beetles of this vintage have the larger windows like that of the classic post-'72 German-built flat-screen Beetles, though as with German-built Beetles made after 1977, the front indicators were located in the bumper instead of the traditional placement on top of the front wings. Although, Mexican Beetles grew increasingly complex over time what with the addition of electronic ignition, a catalytic converter, electronic fuel injection and hydraulic valve lifters etc, this particular example is powered by a far simpler, carburettor-fed version of the enduring air-cooled 1584cc flat-four engine.

After import, `H861 RNG' was reportedly sold by a Maserati dealer in London but the first owner changed his emigration plans and never used it. The vendor, only the second owner, is a VW enthusiast who describes the car as being in "good overall condition" with a "very good" engine, but acknowledges some rust blemishes on the front valance. The front wings and bumper were replaced recently. Bumper over-riders and a fancy exhaust extension come with the car but are presently not fitted. Sold with a V5C, current MOT certificate and road fund licence until the end of October, the low recorded mileage of less than 46,000km (under 30,000 miles) should ensure plenty of life in this enduring classic.
Share: