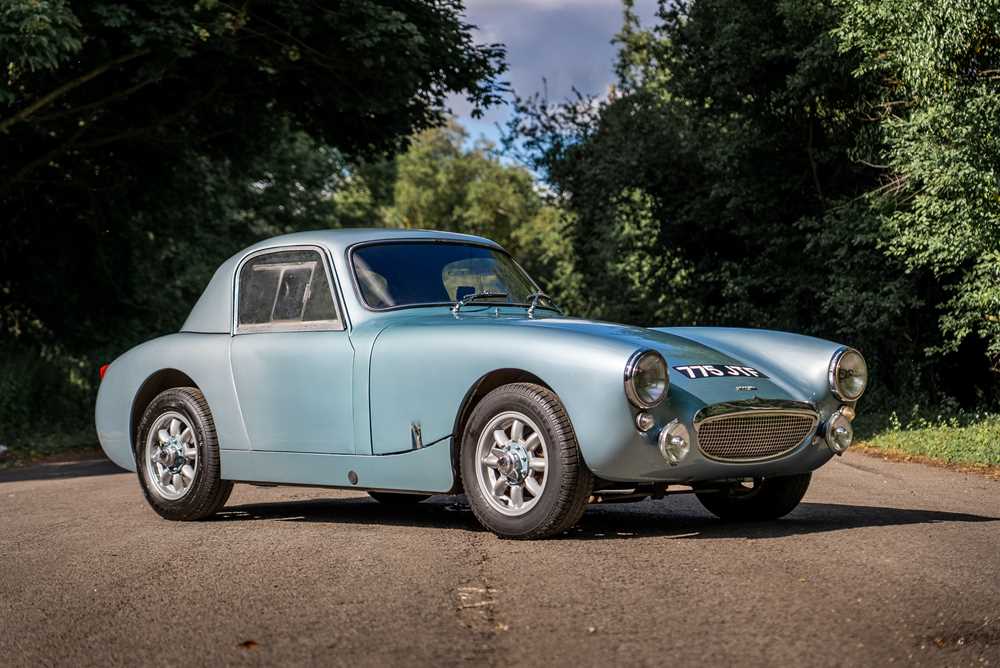 Thanks to its prominent, bonnet-mounted headlights, the original Sprite quickly became known as the 'Frogeye' - a moniker that has stuck to this day. The little two-seater, designed by the Donald Healey Motor Company and built by BMC at the MG factory in Abingdon, was launched in Monte Carlo immediately prior to the 1958 Monaco Grand Prix. The unique, one-piece bonnet covered a mildly tuned, 43bhp 948cc version of the BMC 'A' series engine already found in the Austin A35 and Morris Minor. The suspension was coil spring and wishbone at the front and quarter elliptic springs at the rear, with lever arm dampers all round. The construction was 'integrated' rather than a full monocoque and featured forward projecting chassis legs of the type used in the E-Type Jaguar. The minimal specification excluded exterior door handles and boot lid. Some 49,000 Frogeyes were built between 1958 and 1961. The Sprite was quickly adopted for competition by both privateers and the Works - the latter's first major success being the win of John Sprinzel and Willy Cave on the 1958 Alpine Rally. The model is still proving handy in rallies, races, sprints, hillclimbs and autotests to this day.

The somewhat convoluted story of the Sebring Sprite has been well documented in the past, from the class-winning trio of cars prepared by Donald Healey for the 1959 Sebring 12 Hours Grand Prix d'Endurance. (prototype Dunlop disc brakes, wire wheels, larger SU carbs, twin-plate racing clutches and straight-cut close-ratio gearboxes) through Stirling Moss’ success in the separate four-hour race for GT cars of under one litre at Sebring in 1960, John Sprinzel’s arrival at Austin-Healey with his Frank Costin-designed Speedwell GT and the legendary success of the 5 ‘Works’ and 2 Sprinzel cars at Sebring in 1961, through to the mid-sixties when over a dozen small firms were building their own streamlined bonnet, fastback versions of the Speedwell GT and Sprinzel Sebring utilising Mk1 and 2 Sprites (latterly the MG Midget) and marketing them as ‘Sebring Sprites’.

This particular example is documented to have been the 10th car built to ‘Sebring’ specification by Archers Garage. The company was located at Oldbury, near Birmingham, and following the sad death of long-time Sprite enthusiast Brian Archer in August 2008, it continued in the hands of his partner Andrew Forster. Their work included routine servicing and restoration of mainly British sports-cars, but they were perhaps best known for the production and assembly of Sebring Sprite body sections and complete cars. Brian had wanted to re-produce John Sprintzel’s very pretty streamlined bodied Sebring Sprite for some years and was finally able to do so in the early 1990’s, utilising the original works car ‘WJB 707’ for the creation of the moulds, and from these approximately 100 tribute cars were created over the next three decades. Described by the vendor as being in “excellent condition throughout” and said to incorporate a “superb rust free body structure”, the car is powered by a well-sorted 1275cc A-series engine mated to a 5-speed gearbox. Previously used for various road rally and touring events, other performance upgrades include disc brakes on the front, adjustable rear shock absorbers, knock-on KN alloy Minilite-style wheels and the sporty soundtrack is enhanced by a stainless steel exhaust system. The interior trim is described by the consignor as being “excellent, save for some small holes drilled in the dash where it had a Halda Speed Pilot once fitted”, and “very good to excellent” with regard to its mechanicals and aesthetics. The only listed faults are said to be a “few very minor chips to paintwork” and a “slightly noisy differential”. In 2018, the car was passed on to Fisher Services of Lower Sydenham for almost £5000.00 of recommissioning expenditure. This included the fitment of a 5-speed T5 gearbox, full mechanical service, new brakes to the front and rear, replacement king pins and much more. The car is said to have covered “very little, if any mileage since this work was carried out.”

A previous entrant of many high-profile events, ‘775 JTF’ is road registered and said to be a well-developed, carefully maintained car that should offer great value for money with the possibility of entry into the fantastic world of historic motorsport.