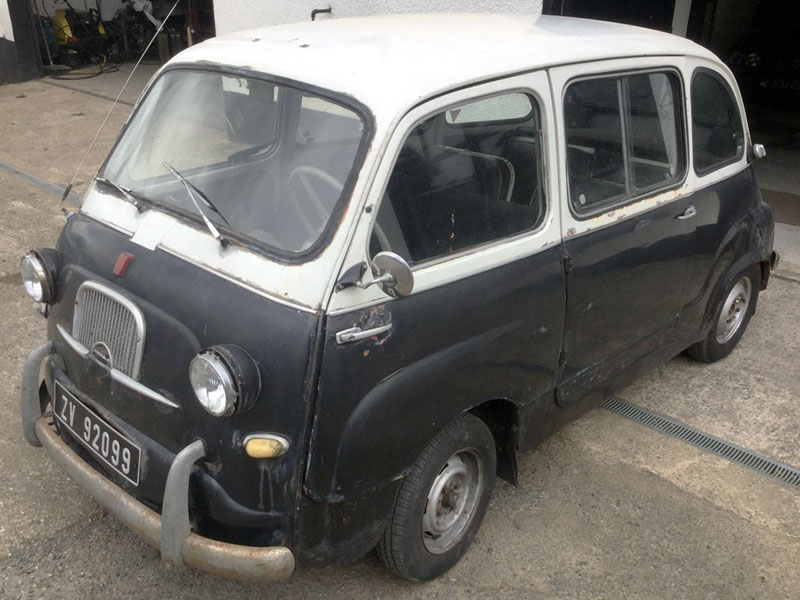 - Running and driving but in need of extensive restoration

Introduced at the January 1956 Brussels Salon, the Fiat 600 Multipla was ingeniously packaged. Despite sitting on a two metre wheelbase, the newcomer could accommodate up to six people. Borrowing the independent double wishbone front suspension and steering set-up from the Fiat 1100 but otherwise utilising the same rear suspension, 663cc OHV engine and four-speed manual transmission (albeit with a lower final drive) as its 600 saloon sibling, the Multipla could be had in 4/5-seater, 6-seater or Taxi guises. Road tested by Motor magazine, the ground breaking MPV was found to be capable of 57mph and 38mpg. Updated to 600D specification in 1960, the Multipla remained in production until the decade's end.

Finished in Dark Blue over White with Black upholstery, this particular left-hand drive example is self-evidently a restoration project. Understood to have been displayed in a Dutch microcar museum before journeying to Eire via Poland, it is a six-seater version the rear two rows of which fold flat. Currently running and driving, this characterful Fiat is described by the vendor as being in 'poor' (bodywork, paintwork, electrical equipment), 'average' (interior trim) or 'good' (engine, gearbox) condition.
Share: