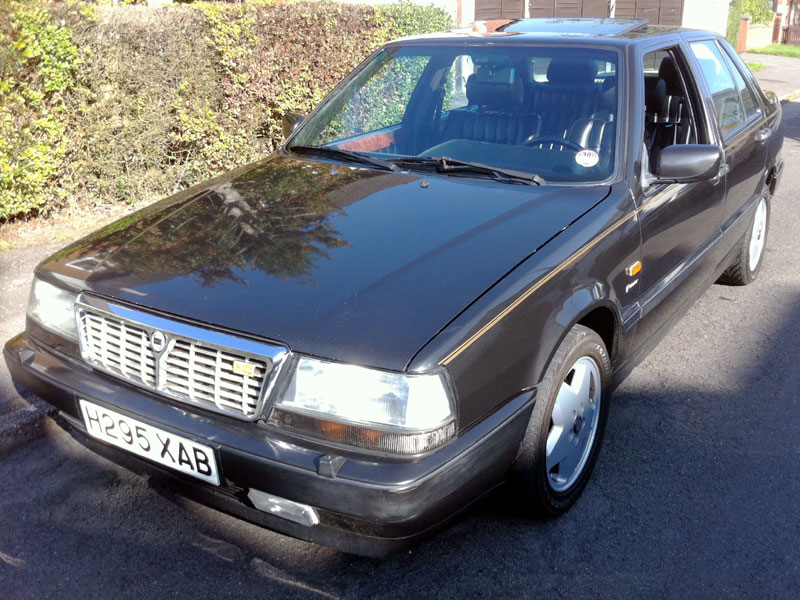 Arguably Italy's most innovative car manufacturer, Lancia developed a formidable reputation for engineering integrity and competition success. Allowed to maintain a separate identity following its 1969 absorption into the FIAT empire, the marque's profile was boosted via the exploits of its all-conquering Fulvia and Stratos rally cars. Launched at the 1984 Turin Salon, the Thema was equipped with a galvanized chassis, all-round independent suspension, disc brakes and power assisted rack-and-pinion steering. Aimed at the executive market, the newcomer oozed pedigree with a Saloon penned by Giugiaro and an Estate bearing the hallmark of Pininfarina. During its ten-year production cycle, the model was fitted with five different petrol engines ranging in capacity from 2- to 3-litres and a 2.5-litre diesel but, without doubt, the prince among the range was the 8.32 model. Unveiled in 1986, it was powered by a unique, cross-plane crank version of the Ferrari 308GTB QV unit, making it the world's only Ferrari-engined Saloon. In non-catalysed form, the 2927cc V8 produced 212bhp - sufficient to propel the Thema from 0-62mph in a whisker over seven seconds and onto a top speed of almost 150mph. The car featured a sumptuous hand-made wood and leather interior by Poltrona Frau. Other special features of the 8.32 included Ferrari-style five-spoke alloy wheels, and a manually extendable bootlid spoiler. Quite a car, of which only nine examples are thought to have been sold on the UK market!

The left-hand drive Thema on offer was sold new to the principal of a German Lancia dealership in 1990 and imported to the UK by a specialist before being acquired by the vendor. It received a stainless steel exhaust and engine overhaul by a Ferrari technician in 2000 and new cambelts in 2001. It has also had a new clutch and brake discs / pads, and the alloy wheels have been refurbished. Said to have been properly serviced by a Lancia specialist, the 8.32 has been used as weekend transport and kept in a dry garage. The Lancia featured in the December 1999 edition of Classic Cars magazine and comes complete with a copy of the article, massive history file (£12,000 of UK bills), two keys and thirty-eight photos of the engine overhaul.
Share: