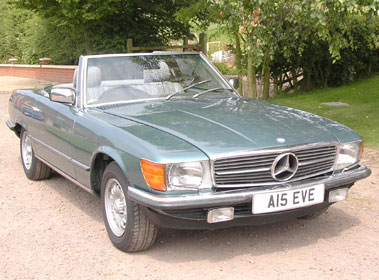 Nicknamed the 'Panzerwagen' by Mercedes-Benz's own development engineers, the R107 series was the result of an extremely thorough design process. In an attempt to avoid falling foul of threatened American safety legislation, Stuttgart produced an open car whose structural rigidity surpassed that of some contemporary saloons! Indeed, even now some thirty-eight years after its introduction the R107 retains a reassuring air of solidity. Allied to this was sure-footed handling courtesy of all round independent coil sprung suspension, power assisted steering and disc brakes. Always more of a grand tourer than an out and out sports car, the vast majority of R107s were fitted with automatic transmission. Launched in September 1974, the Eurocentric 280SL was less powerful but more fuel efficient than its V8 brethren. Though with some 185bhp and 177lbft of torque on tap from its fuel-injected 2746cc DOHC straight-six engine, the model could still boast authoritative 120mph performance.

Finished in metallic blue with grey cloth upholstery, this particular example is described by the vendor as being in "very good overall" condition with regard to its engine, automatic transmission, electrical equipment, interior trim, bodywork and paintwork. While, he further informs us that "I have only owned the car for a short period and it has been extensively renovated to a good standard". Riding on alloy wheels and said to "drive well" this tempting Mercedes-Benz is offered for sale with the cherished number plate 'A15 EVE' and a fresh MOT certificate.
Share: