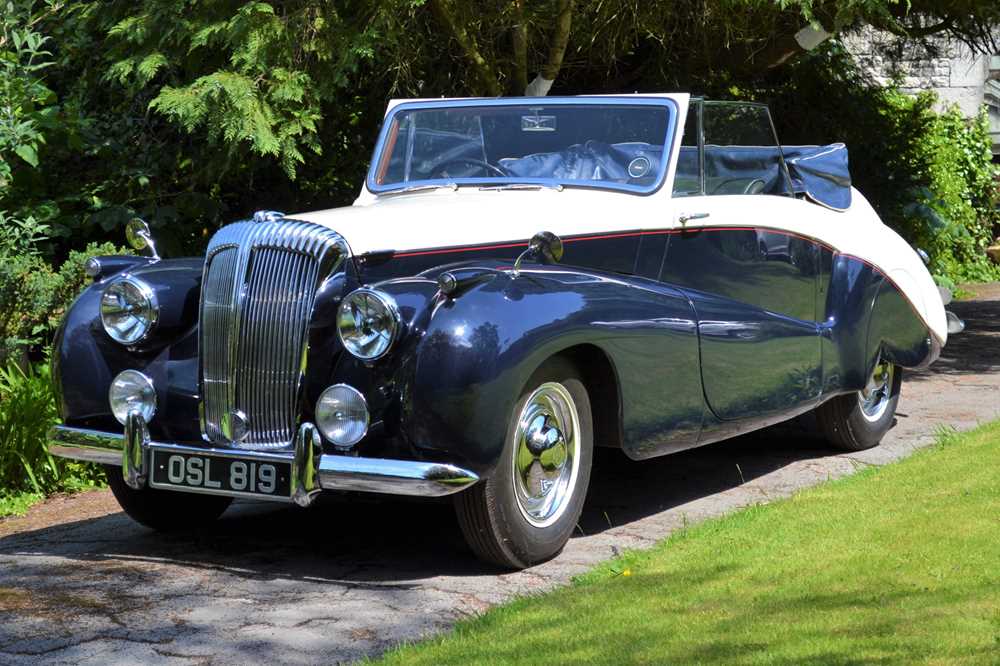 Development of the pre-war Daimler Fifteen culminated with the DB18 model announced for 1939. Independent suspension appeared for the first time on a Daimler and the DB18 featured an enlarged, 2,522cc version of the overhead-valve six first introduced in 1933. Daimler's customary fluid flywheel, pre-selector gearbox and worm drive rear axle comprised the transmission. A new drophead coupé appeared at the first post-war London Motor Show in 1948: the DB18 Special Sports. Stylish in a most un-Daimler-like manner, the Special Sports featured coachwork by Barker, the latter, like Daimler and fellow coachbuilders Hooper, being one of the BSA Group's many companies. The radiator grille was now curved, the alloy-paneled coachwork more streamlined, and the Special Sports benefited from hydro-mechanical braking and a power output raised to 85bhp courtesy of twin carburettors. In short: a model combining all the usual Daimler refinements with increased performance. When DB18 production ceased, only 500-or-so of these elegant and refined Special Sports roadsters had been completed.

This Special Sports was manufactured in 1951 and was registered new in the United Kingdom on the 24th of May 1951. Fitted with the 2522cc overhead-valve straight-six engine mated the pre-selector 3-speed gearbox and overdrive, ‘OSL 819’ is finished in Dark Blue and White paintwork with Blue interior upholstery. The Drophead Coupe has covered a total of just 91,573 miles recorded miles (at time of consignment) which is thought, but not warranted, to be genuine. In current ownership since 2018, the DB18 was in previous long-term ownership from 1991 to 2005.

Comprehensively restored between 2009 and 2011, the paperwork is chronicled to display a total of 3,855 hours completed through the restoration costing over £120,000, with an over 100-page dossier of the restoration accompanying. The DB18 was stripped with the chassis overhauled with renewal of all the suspension and steering bushes. The engine was overhauled including a new cylinder head complete with valves and the gearbox was renovated by Whitehouse, the pre-selector specialists. The Barker’s body has been reframed and refitted with the original panels and repainted. Boasting innumerable new parts through the restoration, listed in the correspondence, notably including a new everflex hood and woolcloth headlining, cylinder head, electronic ignition and exhaust system.

Recently ‘OSL 819’ has received all the hydraulic brake seals, fluids and fitting a new SU electric fuel pump and two front tyres, it is understood to retain the original interior. Offered for sale with a current UK V5C registration document and a history file containing twenty past MOT certificates, the aforementioned restoration correspondence and photographs, plus a reprint handbook and much sundry paperwork.