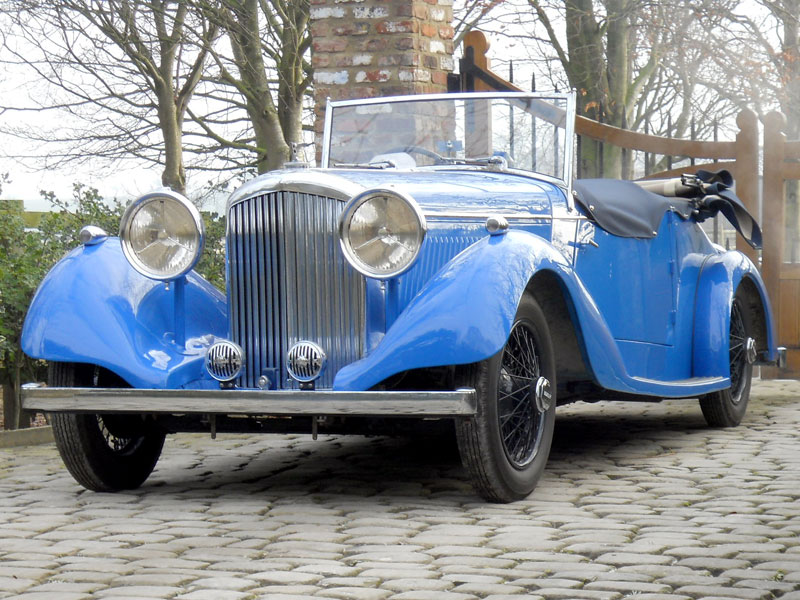 At the dawn of the 1930s with the reverberations of 'Black Friday' (29/10/1929) being felt worldwide, competition between carmakers grew increasingly desperate. Thus, while WO Bentley sought to refine his 8 litre into the ultimate luxury carriage, Rolls-Royce responded by dabbling with a sports car concept. Their concerns as to the branding of 'Peregrine' (as the project was labelled internally) were alleviated by Bentley's collapse in 1931. Outflanking rivals D. Napier & Son, they acquired Bentley wholesale (including WO's services) for £125,257. With a department brief that "the new car must be as unlike the Rolls-Royce models as possible" Derby engineers set about preparing 'Peregrine' for flight. Built on a 'double-dropped' chassis carrying all round semi-elliptic leaf sprung suspension and assisted drum brakes, the new car used a tuned version of the Rolls-Royce 20/25's 3669cc OHV straight-six.

Boasting twin SU carburettors, a wilder camshaft, strengthened con-rods and a higher compression ratio, this revamped unit developed around 120bhp (a fifty percent improvement) without compromising on refinement. Equipped with the 20/25's four-speed manual gearbox, high-geared worm and nut steering and hydraulic dampers, the resultant 'Silent Sportscar' - as the Bentley 3.5 litre soon became known - was unveiled to great acclaim at the August 1933 Ascot Races. Responding to increased competition from the likes of Alvis and Lagonda, Bentley gave its customers the option of a larger 4.25 litre engine during the 1936 season. Priced at £50, a comparatively small sum compared to the cost of a basic chassis, the new unit proved so popular that the standard 3.5 litre powerplant was soon dropped. Nicely balanced to begin with, the Derby Bentley chassis proved more than capable of handling the extra power and torque.

The copy build sheets which accompany this particular example - chassis B-183-JY - reveal that it began life as a Park Ward-bodied Sports Saloon. Supplied new to Stephen Simpson Esq of Spitchwick Manor, near Newton Abbot on July 10th 1937, its initial number plate - 'T7' - had been in circulation for over thirty years and indeed was among the earliest registrations ever issued by Devon County Council. A successful inventor, the Bentley's first keeper added the neighbouring Holne Chase estate to his lands during 1937 too and post-WW2 was instrumental in the repair of Exeter Cathedral. A modest man, he later turned down a knighthood declaring that "no, I want to die plain Stephen Simpson". Apart from belonging to J.P. Bence Esq. of Torquay during 1954, little is otherwise known about the car's early history. Though, by 1996 chassis B-183-JY had been rebodied in the style of a Vanden Plas Two-seater Sports Tourer complete with full flowing wings, distinctive cut-away doors, chrome side strakes, rear wheel spats and an enclosed spare wheel cover.

Not dissimilar in looks to one of Sir Malcolm Campbell's Derby Bentleys (chassis number B-22-GA), the 4.25 Litre was sold that same year by The Real Car Company to R.D.P. Michell Esq. of Kensington Park Gardens. Returning to the care of the renowned dealer during 2001, 'T7' appeared on their stand at the Rolls-Royce Enthusiasts Club's Northamptonshire Rally that year. Spotted there by the vendors' father, it has formed part of a private twenty-plus car collection ever since. Sparingly used over the past eleven years, the Bentley is said to "start on the button and drive very well". The demands of a young family have meant that the Sports Tourer's last major outing was to the Rolls-Royce Enthusiasts Club's Harewood Rally in 2007. Plans to fit a third seat never materialized but the Bentley has benefited from a new Dark Blue hood to compliment its Mid-Blue paintwork and Blue leather upholstery. Showing an unwarranted 74,583 miles to its odometer and riding on wire wheels, this rakish Bentley is offered for sale with a history file, MOT certificate valid until August 2012 and the registration number 'T7'.
Share: