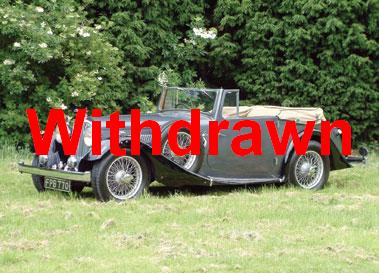 Finished in grey over black with beige leather upholstery and brown carpets, this particular example is described by the vendor as being in "good" condition with regard to its engine, four-speed manual gearbox, electrical equipment, interior trim, chassis, bodywork, paintwork and wheels / tyres. Reputed to have had just three previous keepers (two of whom were brother and sister), chassis 'L539' migrated to America in 1972 where it reportedly became the foundation stone to one of the world's most complete AC collections. The subject of sundry rechroming and a sympathetic repaint in its original grey hue some three years later, more recent work has seen the drophead coupe treated to a new hood. With all import duties paid and a MOT certificate valid until May 2008, an application has been made to the DVLA for the 16/70 to be reunited with its original UK registration number. The vendor hopes but does not promise that this matter will have been resolved by the time of sale.

PLEASE NOTE: We apologise but this vehicle has been withdrawn from the 20th June auction.
Share: