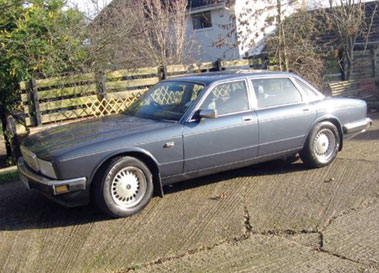 Since the late 1960s the historic Daimler marque has been used by Jaguar to denote the most luxurious version of its XJ saloons and therefore has an extra exclusivity. The Daimler 3.6 was launched in October 1986 as long awaited successor to the much loved Series III featuring squarer, more modern lines incorporating a host of sophisticated electronics. Standard engine was a new 221 bhp 3590cc 6-cylinder unit as the V12 offered in the Series III could not be accommodated under the bonnet. With traditional Daimler fluted radiator grille and boot plinth plus separate contoured rear seating, electrically adjustable heated front seats, air conditioning, cruise control and the leather and walnut interior which Jaguar do so well, the Daimler was a worthy top of the range model. In addition to being a sybaritic passenger's car the Daimler was an excellent driver's car with a superb ride mated to precise handling. Launched concurrently with the excellent new BMW 7-Series, period road testers were divided as to which was the better, although for many the Daimler's sumptuousness over the more clinical BMW won the day. Updated with rear sun blinds and heated door locks in 1987 and remote central locking in summer 1988 the 3.6 (like all XJ40 3.6 models) was replaced by a new 4.0 litre version in September 1989.
This 1989 3.6 model finished in Solent Blue with grey leather interior is one of the last and benefits from all such improvements. Showing a warranted 36,530 miles, we are told this car was originally supplied to Unilever following which it has had one private owner who has 'looked after the car properly' but recently had to stop driving due to failing health. The original handbooks, service book with16 stamps and 12 expired MOTs verifying the mileage will be available for inspection in the document office. The vendor tells us that the last service at Gatwick Jaguar cost £1500 since when 'the car has covered only a few hundred miles'. We are also told that the alloy wheels have been refurbished and are fitted with 'virtually new correct Dunlop tyres'. Described as 'all excellent' with regard to engine, transmission, electrics, paintwork, bodywork, interior, chassis and wheels/tyres the car will sold with a current MOT until February 2008.
Share: